You are here: Home / Tech & Science / Scientists Discovered New Seven Species of Mini-Frogs in the Atlantic Forests of Brazil 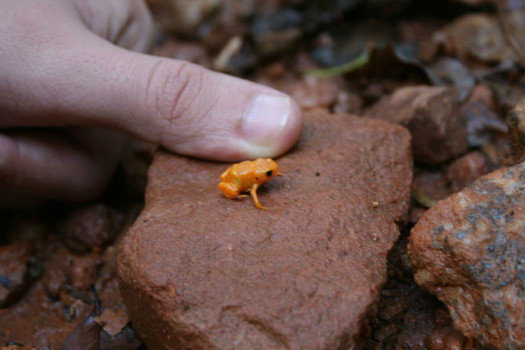 The tiny frogs are smaller than an inch and they have extreme heat sensitivity.

The Amazonian fauna may be far richer than biologists have thought as scientists discovered new seven species of mini-frogs in the Atlantic forests of Brazil on Thursday. The discovery has rejoiced most researchers even though the new species of mini-frogs are very rare and may soon become extinct.

Many researchers have been made before researchers were able to classify the existing species of animals in the entire world. Nevertheless, the data is not riveted and many new changes may appear as experts continue their research work.

A similar discovery was made this week as scientists discovered new seven species of mini-frogs in the Atlantic forests of Brazil. The tiny creatures are smaller than an inch and they require serious prying skills to be able to spot them among the green leaves.

Scientists were lucky as the tiny thumbnail-sized frogs are brightly colored and they can be easily identified once you become aware of their existence. In spite of their brightly colored skin and their small size, the mini-frogs have been endowed with good surviving skills, so they easily escape the attacks of other possible predators.

The newly-found croakers have the ability to sense heat and movements near them, so they can be very difficult to catch. As a matter of fact, researchers have spent 20-30 minutes observing them silently before they were finally able to catch them. The slightest vibration in their vicinity caused the small creatures to run away.

Frogs’ sensitivity to heat is in fact so strong that they live on separate mountain tops so they wouldn’t meet each other. Each new species from the seven genera that have been recently identified live in confined spaces and they usually protect themselves from other animals by hiding underneath the rich flora of the Atlantic forests of Brazil.

Some people might be tempted to think that the bright hues of the frogs’ skin does not help them stay stealth. However, experts have explained that the flashy colors are a response to the presence of tetrodoxin, a toxic substance in the frogs’ skin that can kill attackers. Thus, the rest of the animals are aware that they should not attack the mini-frogs.

The research was conducted by scientists working at the Federal University of Parana, under the close surveillance of Marcio Pie, science professor at the said university. He has labeled the research findings as an important achievement for the science community.

Pie concluded the press release by warning people that humans’ destructive and polluting habits can lead to the extinguishment of these wonderful small creatures. He plans to keep the inch-sized croakers in captivity to ensure their protection.

The research will be published in the journal PeerJ.