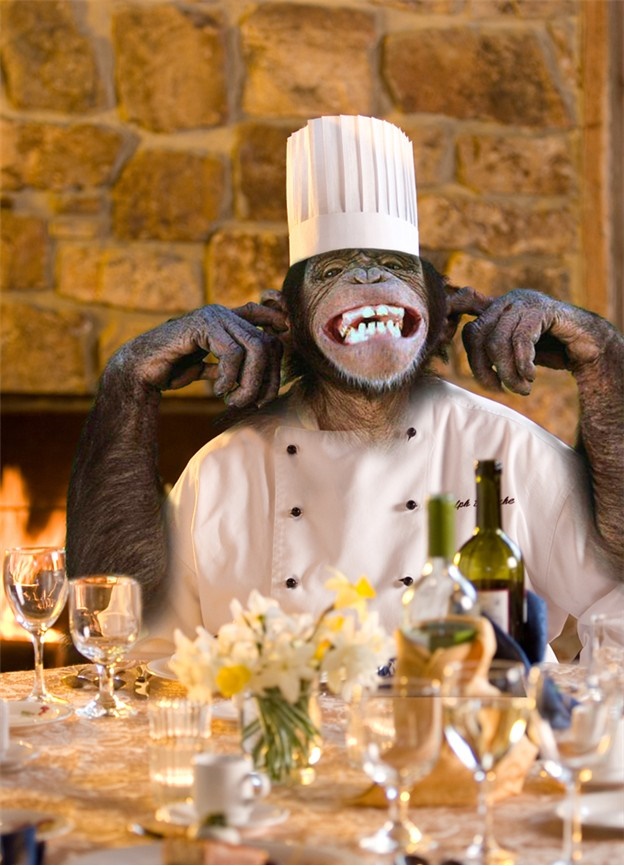 Chimps could soon turn into regular Chefs thanks to their cooking abilities.

Home appliance producers could soon make chimp-friendly ovens – chimps want to cook, new study postulates. The groundbreaking discovery was made by a group of scientists working at the Tchimpounga Sanctuary in the Republic of Congo under the close surveillance of developmental psychologist Felix Warneken. The results of the study were published in the journal Proceedings of the Royal Academy B on Tuesday afternoon.

Developmental expert Felix Warneken was inspired to carry out the recent chimpanzee experiment by the previous works suggesting that primates prefer cooked food instead of raw food. A terrible mistake, organic food supporters might say, but not in Warneken’s opinion. The latter believes changes in chimps’ eating behaviors will lead to an increased cerebral activity and, later on, to the development of the entire simian race.

The recent study was accomplished during nine isolated experiments meant to determine how cook-prone chimps really are. The primates were initially made to choose between seared sweet potatoes and raw ones. Observations have shown that chimpanzees are very fond of cooked food and, what’s more, they are willing to wait for the food to be processed, unlike most humans, who simply rush into any junk food restaurants when munchies get them.

Scientists were not fully satisfied with the findings of the initial tests; therefore they have conceived additional new experiments to determine whether the simians have cooking abilities. Chimps were, thus, handed two bowls, one containing food that appeared to be cooking and the other one, empty. When offered aliments, respondents have chosen to add food to the cooking bowl, instead of the empty one, showing that they clearly understood the concept of ‘food processing’.

Some skeptics might be tempted to say that the chimps carried out the tasks, without making too many intellectual efforts. Warneken, on the other hand, claims monkeys were incredibly sharp during experiments and they even managed to select what products to add in the bowl or not.

Sure, chimps did not instantly turn into a Ratatouille genius and run a rig of their cooking imagination, but they have definitely proven that they understand what products can be cooked and which cannot. When handed wood pieces or other similar debris, the participants in the experiment threw them away instead of adding them to the cooking bowl.

The experiment was conducted on a larger group of chimps as scientists wanted to know whether all primates have cooking abilities or just some of them. The research team did not specify, however, whether the chimps had been previously trained to perform other human-like activities or they were simply unschooled primates.

The only problem that the primates encountered during the cooking process was the handling of the fire system. None of the chimps was able to produce or to control fire, scientists have concluded.

Evolutionary biologist and co-author of the study, Alexandra Rosati, is not concerned, however, as the cooking abilities that chimps now have are very similar to the ones of our human ancestors. Many more complex activities might be developed in the future by primates as they shift their energy from food digestion to other brain processes.
Image Source: Amazon Aws