You are here: Home / Tech & Science / Pink Iguanas on Galapagos Island Could Be Threatened by Volcano Eruptions 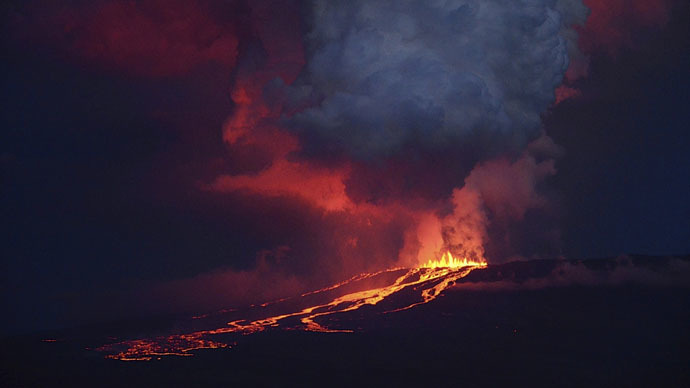 The Geophysics Institute reported on Monday that the community of pink iguanas on Galapagos Island could be threatened by volcano eruptions. The announcement follows the recent eruption of the Wolf volcano situated atop Isabela Island, one of the famous Galapagos Island in Ecuador.

The Galapagos Island have always drawn tourists and scientists alike due to their attractive landscapes and wildlife habitats. One of the rarest species in the islands, however, is now threatened by volcano eruptions. Scientists warn that the Wolf volcano, which erupted this weekend could pose major threats to pink iguanas, one of the many endangered species living on these Ecuadorian islands.

The Galapagos National Park was the first to post pictures of the erupting volcano on their personal Twitter account. The images were accompanied by several explanations meant to draw people’s attention in general and biologists’ interest, in particular, about the urgent need to protect pink iguanas.

The curators of the National Park wrote that the Galapagos Island where the volcano erupted is not a populated area; therefore, the drooping lava does not threaten human beings. However, the opposite side of the Wolf volcano is populated by one of the rarest species at present. The administrators hope the message could determine experts to respond and provide shelter for the endangered species of pink iguanas. “This is the only population of pink iguanas in the world,” Galapagos National Park concluded.

The 1.1-mile high Wolf volcano has taken all inhabitants by surprise when it suddenly erupted during the past days. The volcano had been inactive for almost 33 years and nobody suspected Wolf would become active now. There were no signs suggesting that there could be an imminent eruption.

Recent analyses show that the lava is flowing down the southern side of the mountain, whereas the population of pink iguanas reside on the northern side of the volcano. Even though the species is very close to the lava, experts believe the reptiles have the capacity to survive the phenomenon without getting injured.

Wolf’s eruption is likely to cause possible harms to the Galapagos fauna. The lava will most likely head towards the sea where it could affect the marine life. Also, the Geophysics Institute thinks the volcano clouds might affect the population living in the area. Inhabitants must protect themselves as much as possible against the unbreathable smokes and clouds that are specific for volcano eruptions. Otherwise, they could experience respiratory problems.

Many volcano eruptions take place in the region every year. The most recent eruption was registered in April, when the Sierra volcano on the Isabela Island became active. Biologists were afraid the seismic activity could threaten the communities of yellow iguanas and giant tortoises, but they eventually managed to escape the eruption.
Image Source: CDN