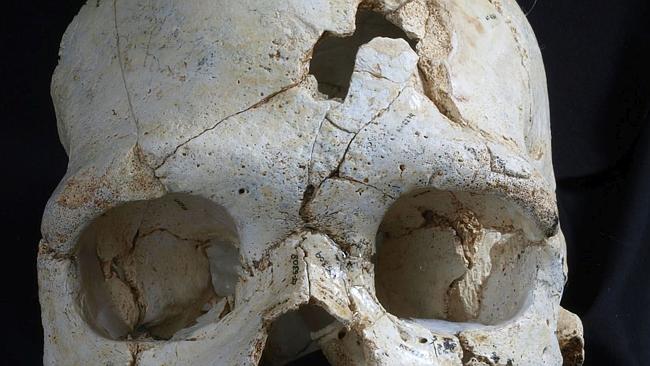 Scientists have made one of the greatest discoveries in point of early human behavior due to recent skull bones unearthed at Sima de los Huesos cave. The new-found prehistoric skull casts light on 430000 year old murder case, according to scientists’ declarations.

On Wednesday scientists working at the Sima de los Huesos cave have stumbled upon what soon became one of geologists’ significant discovery casting light on prehistoric human behavior. Researchers have unearthed a complete skull, which was listed as Cranium 17 by investigators working on the site.

The cranium was broken into 52 pieces, most of them hidden under the thick clay of the cave. Luckily, the bone fractures have been quickly identified and the skull was immediately reconstructed.

Computer-generated images have revealed that the prehistoric man, whose skull was recently found, died as a result of an induced brain injury. This conclusion was reached after scientists noticed that the skull presented similar injuries on top of the eyebrows.

The skull holes suggest that the prehistoric man was killed in a brutal altercation. Scientists, however, do not completely eliminate the possibility that the man might have injured himself in an accident and thus, that he died in the cave.

Further analyses were carried out in order to withdraw additional information on the prehistoric murder case. Thus, scientists noticed that the two brain blows had been individually created, so the chances that the man could have died in an incident drop significantly. “The fractures show different orientations and different trajectories, implying that each fracture was caused by an independent impact,” scientists working on the site have explained.

The conclusion is rather clear, in researchers’ opinion, the prehistoric man was intentionally murdered. The fact that the remains of the skull were found buried after specific Sima de los Huesos rituals have further strengthened the belief that the recent discovery accounts as evidence in the first prehistoric murder case.

There weren’t many murder weapons that scientists could think of, based on the information they have gathered. The only possible harming utensils that investigators could think of was a stone, judging by the hole shapes in the skull.

While the cranium is a significant find in itself, there are many conclusions that may be further drawn by simply analyzing the prehistoric murder case. Anthropology experts are particularly interested in pinpointing the factors that might have caused the Homo sapiens to respond using violent behavior.

The 430000 year old skull proves that the first human communities were just as cruel to one another as animals. They most likely borrowed many of their psychological traits from the other living creatures surrounding them, namely predators. “It implies a clear intend to kill,” said leader researcher Sala after stating that Homo sapiens were savage during that historic period.
Image Source: Resources