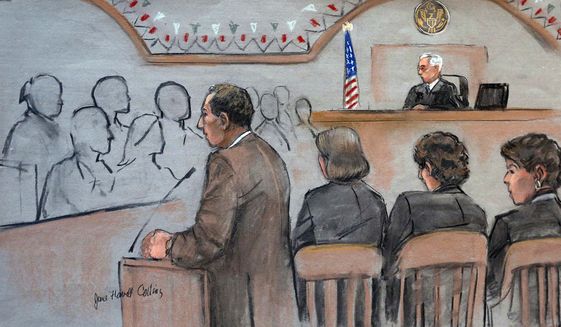 On March 4, The Boston bombing trial started. Marathon survivor testimonies began the same day, with grisly details of the April 2013 attack being revealed by witnesses who described the nightmare the victims went through then and have been living with from that day on.

In fact, some of the information revealed has been so gruesome that it was met with objections from the defense attorney. David Bruck, one of the attorneys representing Dzhokhar Tsarnaev, the accused in the Boston bombings trial, objected to the extent of the testimonies of three victims who described their injuries and what they saw the day of the attack. The lawyer complained that their depositions had been too detailed, and such testimonies should be limited in the future. However, judge George O’Toole Jr. rejected his objections, siding with the prosecutors. They advocated there was no reason why any of the testimonies should be left when the punishment is already decided.

The attacks, conducted by Dzhokhar Tsarnaev, 19 years old at the time, and his brother Tamerlan, left three people killed and more than 260 injured when two bombs exploded near the finish line of the 2013 Boston Marathon. While his brother was shot dead in a getaway attempt a few days after the incident, Dzhokhar is now possibly facing death sentence. He currently faces 30 different charges for the bombings and shootings that took place after the Boston marathon bombings.

Moving past the nightmare

The blasts killed three people, including an 8 year-old boy. Of the 260 injured, Rebekah Gregory was one of the first victims to testify. She recalled how she was trying to help her 5 year-old son, but couldn’t because of her own injuries. She has been having nightmares about that day ever since, but she gathered the strength to accuse her perpetrator on Wednesday. In an emotional letter she posted on Facebook later that night, she called Tsarnaev “coward”, “A little boy who wouldn’t even look me in the eyes”. The testimony left her liberated, saying she will no longer be afraid while he is in confinement. It made her stronger.

On Thursday, Jeffrey Bauman was the first witness to testify on an encounter with an alleged bomber. He was wearing shorts when he walked in the courtroom, since the first bomb left him a double amputee. The image of him being carried away from the marathon in a wheelchair became one of the symbolic photos after the attack. Bauman later described Tamerlan Tsarnaev to the FBI as a potential suspect, having seen him just before the two bombs exploded, as he was standing alone and wasn’t enjoying the race. The man struck him as odd.

Frank Chiola, another witness who testified on Thursday, was on duty at the Boston Marathon finish line in April 2013. As a policeman, he was standing near to the place where the bombs went off, and described for the entire court court the state of shock he was in during the uncertain moments following the attack. He tried to save the life on one of the three people killed in the blast.

“I saw blood everywhere. Shock. People’s faces you couldn’t tell who was alive, who was dead.”

Dzhokhar Tsarnaev told police the bombs were built by him and his brother alone. People involved in the case think, however, that they were sophisticated devices, and although the suspects were quickly apprehended, the question remains if there weren’t any accomplices. Prosecutors have already concluded that “these relatively sophisticated devices would have been difficult for the Tsarnaevs to fabricate successfully without training or assistance from others.” Since there is no evidence the two Chechen brothers tested the devices before the attack, one of the possible explanations would be that there was a third person, skilled in bomb manufacturing, who had offered them assistance.

Court documents say there is no hard evidence associating them with actually making the bombs, contrary to what Tsarnaev testified. It is believed the two brothers, ethnic Chechens who had been living in the US for more than ten years, were driven to the attacks by anger over American wars in the Muslim lands. The older Tsarnaev had recently spent time in Russia, for six months in 2012. During the investigation, federal authorities questioned his links to the Islamist radicals, and they have been focusing on potential training he may have received prior to the attacks.

Dzhokhar Tsarnaev is facing 30 federal charges in connection to the Boston Marathon bombings, 17 of which might bring him the death penalty. Also, he is charged whith the killing of a MIT police officer, after the bombings. He has pleaded not guilty to all of them. The purpose of the trial is Boston is to determine not if Tsarnaev committed the attacks, but why he did it. On Wednesday, the opening statements of the trial portrayed two different versions of the accused.

A man of cunning, who planned to and did kill, a cruel terrorist, committed both emotionally and intellectually, poised on getting revenge for the wars waged by America in the Muslim world. This is what prosecutors argued.

Defense lawyers built a strategy aimed at saving Tsarnaev from the death sentence, getting him the more lenient punishment of life in prison instead. They do admit that he committed the crime, but also argue that he was heavily influenced by his older brother. Judy Clarke, one of his attorneys, describes him as a normal teenager, interested in girls and cars, who was swayed by an evil older brother whom he loved and respected a great deal. “It was him, but he did not act alone”, Ms. Clarke said.

Admitting the guilt, but pointing at his brother as the mastermind behind the attacks, defense lawyers hope to convince the jury to spare Tsarnaev’s life. Under the federal death penalty law, the trial will enter a second phase, where the jury will decide if Dzhokhar Tsarnaev deserves to die.