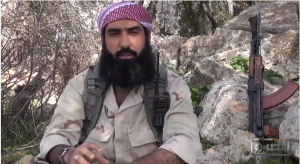 Al Qaeda’s Syrian wing announced on Friday that an Al-Qaeda General Military Commander, Abu Humam al-Shami, was killed in a government air-strike in Syria. The operation was conducted in the Idlib province, in the northwestern part of the country, and left at least three other Front commanders dead, al-Shami being the senior-most member of the group.

Insurgents claimed the air-strike that hit the town of Salqin, near the border with Turkey, was an US-led coalition act. A spokesman for the coalition, which has been conducting operations against ISIL held objectives in Syria, said that no air-strikes took place within 200 miles of the province in the past 24 hours. Moreover, SANA, the Syrian state news agency, reported that al-Shuri “was killed in a military operation carried out by the Syrian army…in the village of Habeet, in the northern Idlib province.”

According to Al-Jazeera, it is a very powerful blow for Nusra. Social media was flooded by jihadist messages following the post of the announcement. While some are still divided whether al-Shami was really killed or will live to fight another day, the Nusra Front official statement on Twitter was that “The Islamic Nation is bleeding because of the news of the martyrdom of Commander Abu Humam”.

Abu Hamam al-Shami, an al-Qaeda veteran, made his first public appearance in March 2014, in an attempt to to undermine the legitimacy of the rising Islamic State. He was considered a fierce rival of the “caliph” Al-Baghdadi. Since then, he had assumed the position of general military leader in the Nusra Front. Although it is still unclear whether he held that position until the day of the attacks, he was under no doubt a core al-Qaeda member, and his death will have hurt the organization.

The attack comes as a blow to the Nusra Front at a time when its ideological rival, the Islamic State, has been aggressively seeking to consolidate its power in northern parts of Syria. ISIL, who already controls a third of Iraq, has been known to cooperate in the past with the al-Qaeda branch, but the two factions have more recently been seeking to undermine each other rather than unite their efforts.

Another issue than remains unsolved is whether the Nusra Front’s overall leader, Abu Mohammad al-Golani, was also killed in the strikes. While insurgents suggested al-Shami fell victim to an operation targeting a high-level meeting between the group’s senior members, the exact identity of the three others remains a subject of debate. After Thursday, the Front told its members to refrain from making further statements to the press.

Besides their struggle against ISIL, the Nusra Front has also engaged western-backed Syrian rebels this year, seizing weapons and territory from them so as to consolidate its power in northern Syria. One such group, Hazzm, probably the last non-jihadist opposition to president Basahr al-Assad in northern Syria, dissolved itself after several engagements with the Nusra Front.

Since the escalation of the crisis in March 2011, the secular opposition in Syria has been constantly diminishing, benefiting radical Islamist organizations such as the Islamic State or the Nusra Front. The growing power of this non-state actors further complicate the diplomatic background of the Syrian conflict, making a peaceful solution very hard to reach. The civil war has already claimed over 200,000 lives; over 76,000 people, including thousands of children, were killed last year only.
Image Source: TheLongWarJournal