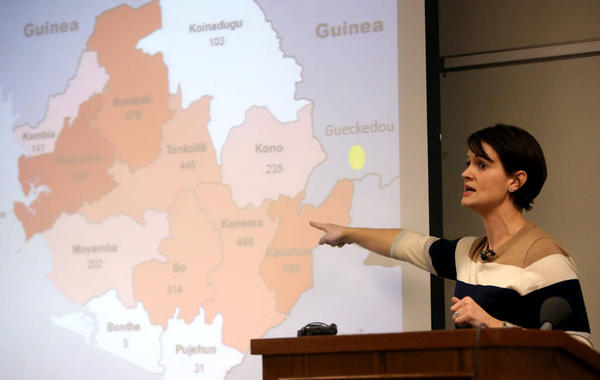 Even if American media is slowly losing interest in the Ebola outbreak in West Africa, the dynamic in the region remains worrisome. But luckily, doctors are still doing their best to alleviate the situation. Dr. Angela Dunn, epidemic intelligence service officer with the Centers for Disease Control and Prevention, recently shared her experience in Sierra Leone during a conference held at the Utah Department of Health. Sierra Leone experienced the worst outbreak of the deadly virus. The Utah doctor urges more involvement in Ebola outbreak.

According to Dunn, the main problem there is not Ebola itself but the absence of the means to deal with the infectious conditions. The service officer referred to poor infrastructure which is mostly the outcome of the extended civil war. Dunn pointed out that Americans take many things for granted and cannot imagine how it is to lack basic things like running water.

Ebola started spreading in December 2013 and arrived at a low point this January, with less than 100 new cases being registered. According to Dunn this implied things were getting under control. Then in the first week of February, the outbreak crested once more prompting health experts to feel overwhelmed.

Landing in Sierra Leone in October, Dunn recalled she felt like she couldn’t do much there but she was eventually very helpful in teaching local health staff how to distinguish and avert the spread of the virus. She described the situation in the region:

“People there are scared. They don’t know what happens to their family members who are taken away once they are believed to have Ebola. They don’t always come back.”

Dun explained that the few treatment centers are very ill-placed and look more like penitentiaries than health care centers. She further detailed that in the evenings electricity goes out and that pen and paper are the main way to track the disease since Internet is widely unavailable.

Apart from the Ebola- caused deaths, Dunn contended, the nation is still struggling with other awful outcomes of wild spread, including financial strife,  threatening prospects of  starvation, industry problems and medical services issues, as all health care efforts  are put into the Ebola outbreak.

“There has been a lot of outpouring recently. But they need more. Much more in the form of human resources. It’s still a huge situation there. We need to keep it in the forefront of our thoughts, and not just Ebola but the true problems of Ebola.”

The world has never seen such an expansive outbreak of Ebola and this led to more research trying to give answers to numerous inquiries regarding the malady and find a viable solution. Dunn simply hopes that people won’t rush to overlook this efforts.