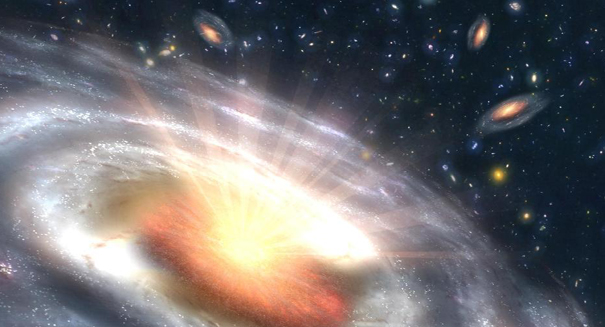 Scientists used two of the most powerful radio telescopes in the world to study a nearby supermassive black hole and found that the black hole was blasting through its host galaxy incredibly strong winds that virtually reshaped the way stars were forming in that region.

Researchers focused their radio telescopes on a neighboring quasar dubbed PDS 456. A quasar is a very bright center of a galaxy which surrounds a supermassive black hole. Scientists explained that most galaxies have a huge black hole at their center that absorbs immense amounts of matter, while blowing out tons of radiation, as well as producing super-fast black hole winds.

The winds were detected in the PDS 456 region by the NASA’s Nuclear Spectroscopic Telescope Array (NuSTAR) and ESA’s XMM-Newton radio telescope. The two telescopes revealed that the quasar winds blow powerful enough to blast away the cosmic dust required by nearby stars to form.

Emanuele Nardini from Keele University, in the U.K. and lead author of the finding said that her team now holds scientific proof that the quasar winds are so strong that can leave a galaxy without its supply of gas, which fuels the birth of new stars within that galaxy.

Until now, scientists had only theorized about the existence of those winds and their impact on neighboring star embryos. But the X-ray observations of NuSTAR’s and XMM-Newton’s on PDS 456 brought them the hard evidence to back their hypothesis.

For an astronomer, studying PDS 456 is like a paleontologist being given a living dinosaur to study,”

stated Daniel Stern of NASA’s Jet Propulsion Laboratory (JPL) who was also involved in the finding.

Supermassive black holes, which can outweigh the mass of billions of suns, release X-ray charged winds which spread additional matter into the galaxy. These winds are so fast that can reach one-third of the speed of light.

Throughout PDS 456, such winds can carry every ticking second more X-ray radiation than nearly a trillion suns, according to the new findings.

PDS 456 is located more than two billion light years away from us, but the radiation and iron atoms carried by its winds can still reach our planet. NuSTAR revealed that the atoms were present all around us. Also, the data gathered by the telescope showed that the winds were blowing in a spherical way, rather than in a beam.

Summarizing the data on the shape and the reach of quasar winds, scientists were able to estimate their average speed as well. They learned that they could blow so fast to blast the star formation material out of their host galaxy.