You are here: Home / Health / People Who Hand-Wash their Dishes Have Healthier Kids, Study Shows 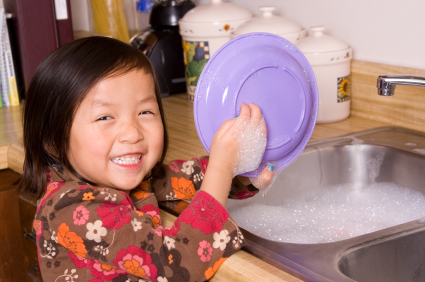 A new study shows that children growing in families that routinely hand-wash their dishes are less likely to develop an allergy than kids whose family members routinely use a dishwashing machine.

The new finding brings additional evidence to the “hygiene hypothesis” which speculates that modern-day kids develop so many allergies because they live in a pathogen-deprived environment. According to the hypothesis, on a nearly zero bacteria exposure, they cannot build up a sturdy immune response so they will have an increased risk of developing allergies later in life.

Past research had revealed that there are a set of other factors that may contribute to acquiring a healthy immune response such as having a pet in early childhood, living on a farm, or eating fish at an early age. But none of the previous studies linked a well-built immune system to not having a dish-washer in the house.

If you are exposed to microbes, especially early in life, you stimulate the immune system in various ways and it becomes tolerant,”

explained Dr. Bill Hesselmar, lead author of the  study and researcher at the Queen Silvia Children’s Hospital in Gothenburg, Sweden.

For their research, the scientists surveyed more than 1.000 children aged 7-8, and their parents or tutors’ dishwashing habits. The data showed that children living in homes where dishes were hand-washed, rather than inserted in a machine, had a visible lower risk of developing allergies.

Only 23 percent of children whose family used to hand-wash their dishes had developed eczema, compared to 38 percent of kids living in families which used an automatic dishwasher. Scientists also found that these figures were amplified whenever children ate organic foods bought from local farms.

However, there wasn’t a lowered risk of developing asthma in kids whose families used to do their dishes. Researchers also reported that their study only revealed a certain link between lower allergy incidence and the manually dishwashing, rather than a cause-and-effect relationship.

Swedish researchers noted that it wasn’t necessary that children do the dishes themselves, since many of them were too young to perform that chore. Instead only the presence of a dishwasher machine in a household was enough to boost the risk of contracting an allergy.

Past studies had shown that dishes inserted in a machine had fewer bacteria on them than those washed by hand. It seems that eating off of plates that carry more bacteria increases the kids’ exposure to pathogen and force their bodies to build a more efficient immune system.