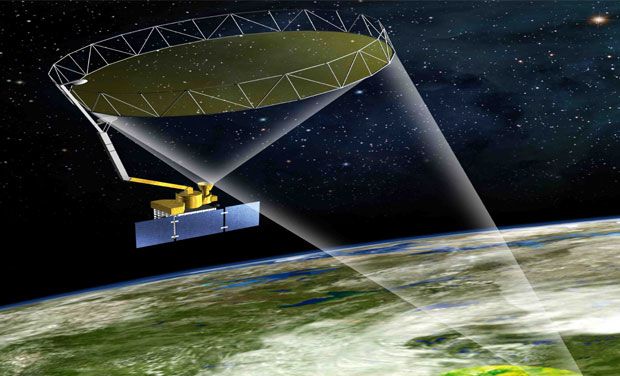 In one of the space agency’s bolder projects, a newly launched NASA satellite will monitor western drought and study the moisture, frozen and liquid in Earth’s soil. It’s true that a satellite can’t possibly fix the devastating drought that has been plaguing the American West for the last years. It is also true that it can’t possibly change the fact that California has just gone through the driest month in recorded history. But what NASA plans to do is to provide the possibility of understanding the patterns of this extreme weather and, perhaps, foresee how much worse it could actually become.

Called the SMAP (Soil Moisture Active Passive Satellite), this new, unmanned project was successfully launched on Saturday atop the United Launch Alliance Delta II Rocket. The launch took place at the California Vandenberg Air Force base at exactly 9:22 AM EST. With the successful launch, NASA just kick started a three year, $916 million mission focused on measuring and forecasting droughts, floods and other possible natural disasters that might come our way in the future.

With the help of SMAP, scientists will be able to measure the top 2 inches of Earth’s soil. SMAP is equipped with an enormous antenna that can help generate a global map of our planet’s topsoil moisture situation. Such a map will be created every three days for the first three years of the missions, NASA officials reveal.

SMAP’s antenna is the first of its kind (and size) to be launched into space. Information collected by this gigantic, rotating, 20-feet-diameter antenna will be transmitted back to us via satellite. Charles Bolden, NASA Administrator, explains that the importance of SMAP is unprecedented. It is the first time that such a space-born asset grants us the ability of evaluating freeze-thaw cycles. After analyzing the data received by SMAP, scientist will be able to understand the differences between frozen and normal-moisture areas on Earth. Additionally, they will be able to closely investigate the carbon dioxide cycle.

But how exactly does such an elaborate antenna pick up on the exact moisture levels in Earth’s soil? Moist soil, scientists explain, can emit faint microwave signals. The intensity of the microwave signal is inversely proportional to the soil’s moisture. So, the higher the soil’s water content, the weaker the signal. SMAP’s antenna can pick up on these signals and can also emit its own microwave pulses towards Earth. Moisture also influences the rate of microwave reflection.

After gathering all this data, SMAP will create computer models foreseeing weather, climate as well as agricultural production.

Dara Entekhabi, the SMAP science team leader, underlines the unique position that SMAP is in. Its measurements can significantly impact two very different domains. On the one side, Entekhabi explains, SMAP can accurately see into our environment’s “metabolism”. On the other side, it can also have practical applications for our day-to-day lives, as scientists could get a sense of the imminence of floods and their most probable locations.

The launch, which came with a 24 hour delay due to tempestuous winds and an impromptu minor rocket repair, was spectacular, as NASA launch director Tim Dunn described it.

“We’re in contact with SMAP and everything looks great. We couldn’t be happier.”

At 9:22 am EST, the first booster engine was brought to life. Ignition of the Delta II solid fuel boosters soon followed, lighting up the morning sky at the Vandenberg Air Force base for a long-awaited mission. The 127-foot-tall rocket soared through the sky, carrying the SMAP antenna over the Pacific Ocean. 100 seconds after liftoff, the strap-on boosters were jettisoned, leaving the Aerojet Rocketdyne to continue burning for 2 ½ more minutes. It, too, shut down, just as expected. After its first stage fell away, the second stage engine ignited and continued SMAP’s boost into orbit. This second stage engine also shut down after 10 minutes and 44 seconds, only to re-ignite 55 minutes after take-off to ensure that the spacecraft reaches its planned orbit. Soon after, the SMAP satellite was set free into orbit and its solar panels unraveled.

Alongside 19 other satellites currently gazing down at our Blue Planet, SMAP will collect data from its orbit, located at approximately 426 miles above the surface of the Earth. Additionally, SMAP belongs to the initial five satellites that NASA had scheduled for launch in 2014. These five include the ISS RapidScat, the NASA Orbiting Carbon Observatory 2, the Global Precipitation Measurement Core Observatory (which were all launched into space in 2014) as well as the Cloud Aerosol Transport mission.

According to NASA SMAP program executive Christine Bonniksen, the project will allow influential decision makers to better comprehend soil moisture and its role in the water cycle. Soil is actually the first point of contact for precipitation, before it can enter rivers and return to the atmosphere. Consequently, soil moisture levels significantly influence particular areas of interest.