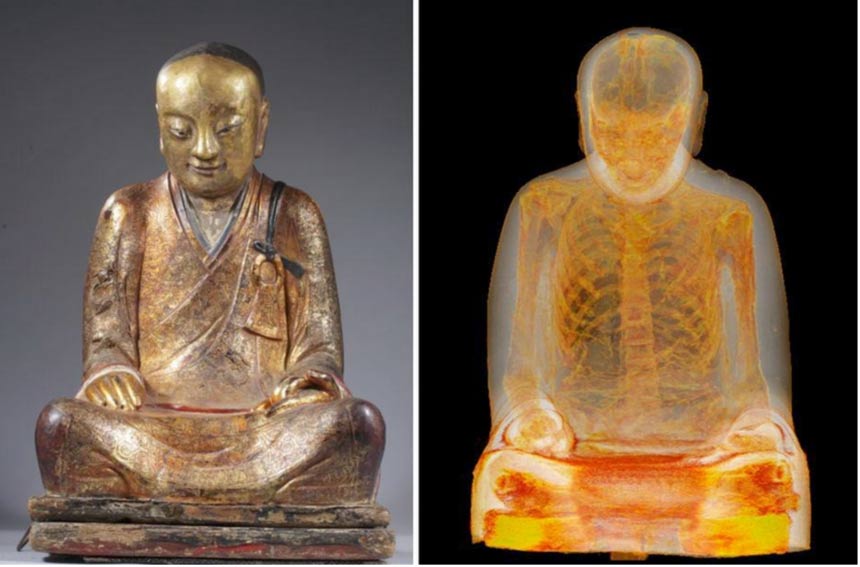 Scientists were shocked to find a mummified monk was found inside a Buddha statue that was more than 1,000 years old.

The body of the mummified monk was folded into the same position as the Buddha and placed inside the statue. The Chinese statue was exhibited at the Drents Museum in the Netherlands and for a while, scientists had no idea of what it was encased in it.

Last year, the Buddha statue was taken to the Meander Medical Centre in Amersfoort for full CT scans. Samples were also taken with the help of an endoscope and the entire operation was carefully supervised by Erik Brujin, a Buddhist art expert.

The tests also revealed that inside the statue lies much more than just the remains of Liuquan. Another extraordinary discovery was made, because apparently, the organs of the monk had been removed for the mummification process and the empty cavities were filled up with scraps of paper on which Chinese characters were written on.

Scientists believe that Liuquan prepared his whole life to become a living Buddha. He lived a very ascetic life and considered, as many Buddhists monks used to and some still do, mummification as being just an advanced state of meditation and not death.

Monks who seek to become mummies go on a drastic diet to prepare their bodies and minds for the process. They start by consuming water, seeds and nuts for 1,000 days and then for the following 1,000 days they eat roots, pine bark and a tea made from the sap of the Chinese lacquer tree. The substance in the sap is toxic and it is used by monk to keep maggots and bacteria at bay. The next step is to be closed inside a stone tomb and await death.

The tomb is unsealed 1,000 days after the monk is locked voluntarily inside it and if the mummification process is successful they are taken out and taken to be venerated in temples. If not, then they remain in the tomb and are respected for their attempt.