You are here: Home / Health / Energy Drinks May Boost Hyperactivity in Children by More than 60 % 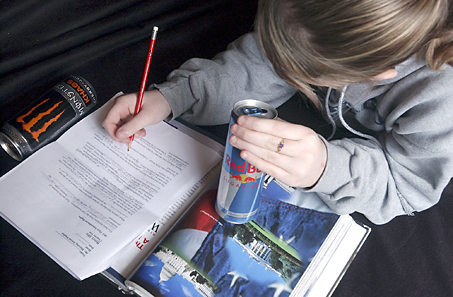 Researchers from the Yale School of Public Health found that energy drinks increase the risk of hyperactivity and inattention in school children by 66 percent. Researchers believe that the mix between caffeine and other nervous system stimulants such as guarana and taurine may agitate the schoolers.

The Yale study was conducted on more than 1,600 middle-schoolers in the 5th,7th and 8th grade. The kids were surveyed about they sweetened beverage consumption, while scientists assessed their levels of inattention and hyperactivity. The study’s initial goal was to compare the effects of various beverages on middle schoolers.

The study authors wrote in their paper published Jan. 8 in the Academic Pediatrics that unlike soft drinks, fruit juices and other sweetened beverages, energy drinks were linked to a greater risk of hyperactivity in children.

Researchers explained that the finding may be related to the presence of several exotic ingredients in the most popular energy drinks, such as taurine and guarana. These two in combination with caffeine may cause the problems in schoolers, researchers say.

Energy drinks contain large amounts of caffeine, sugar and other ingredients that work synergistically with caffeine. Caffeine may be contributing to this association because the caffeine content of energy drinks is far greater on average than that of soda,”

scientists wrote in their paper.

The American Beverage Association, which is a trade association which issue guidelines to the companies that sell nearly 95 percent of the energy drinks in the U.S., urges producers not to market or sell their energy drinks to children that are under 12 years of age. The A.B.A. also prohibits the commercialization or marketing of these drinks in K-12 schools, or during K-12 school events or activities.

The American Academy of Pediatrics explained that, unlike sports beverages, energy drinks contain caffeine, which is a stimulant substance. The A.A.P. argued that stimulant substances are components that our bodies don’t need to maintain their healthy state, but when consumed too frequently they may lead to addiction.

And the risk of physical dependence and addiction are all the more high in children due to their developing neurologic and cardiovascular systems, reported the A.A.P. The academy also found a link between caffeine intake from energy drinks, and hyperactivity and a cohort of other health-related problems.

Even when consumed at low levels, some effects of caffeine include increases in speech rate, motor activity, attentiveness, gastric secretion, dehydration, and temperature. Caffeine can cause sleep disturbances and can increase anxiety in those with anxiety disorders. It can also cause numerous cardiac effects including elevated heart rate, blood pressure and cardiac arrhythmias in susceptible individuals,”

the A.P.A. reported two years ago.

Both Yale researchers and the A.P.A.’s health experts recommend that parents should limit the consumption of sweetened beverages of their children and that “children should not consume any energy drinks.”