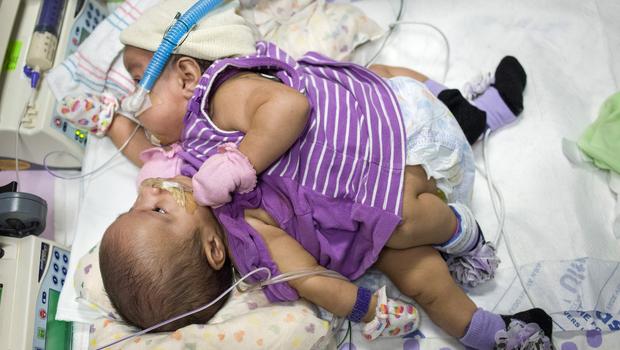 Doctors managed to separate conjoined twins after a grueling 25-hour long surgery. The twins, two girls, shared many organs systems, such as the lining of the heart, the abdomen, the diaphragm, pelvis, intestines, chest walls and lungs.

Surgeons had prepared for months in advance and operated for a 26 hours to separate the twin girls. The team of doctors that was involved in the operation included eight surgical nurses and anesthesiologists. Even though at the moment the girls are in critical condition, the doctors are optimists about their recovery and believe they have a high change of surviving.

The ten-month old conjoined twins, Adeline Faith and Knatalyne Hope are expected by doctors to make a full recovery, even though their current condition is quite critical. Doctor Darrell Cass revealed to the media that the operation of separating the two twins who shared part of their heart lining, colon, liver, lungs and pelvic area lasted for 26 hours.

The surgery took place in Houston, TX at the Texas Children’s Hospital and it was planned even before the conjoined girls ever saw the light of day in April of 2014.

Cass revealed that the surgery was not without challenges, but that he is pleased with how they are doing. He continued to say that the doctors are very optimistic that they can both have a great outcome.

As mentioned, the condition of the twins is a critical one, they are connected to ventilators and will remain so for the next week. They are also expected to stay in the intensive care unit for two more months after which they will undergo even more surgery.

Cass also revealed that during the lengthy operation the blood pressure of Adeline dropped so low that they needed to pump her heart manually for a few minutes. She little girl recovered after around eight minutes and manual pumping wasn’t needed anymore.

Elysse Mata, the twins’ mother said that she was grateful to all the doctors and to everyone who had cared for her daughters and gave then a change to live separate lives.

She continued in a statement released by the hospital:

We know how much planning and time went into this surgery and we are so blessed to be at a place like Texas Children’s where we have access to the surgeons and caretakers that made this dream a reality.