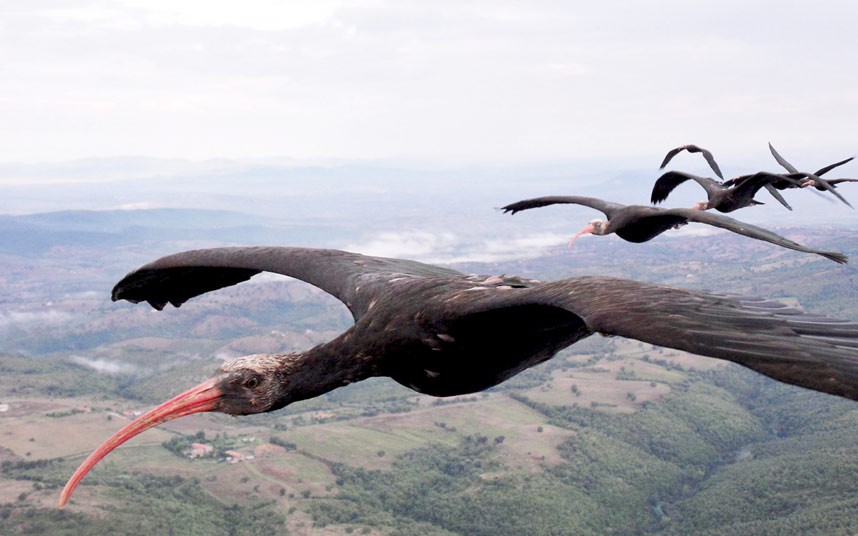 Scientists found that migrating birds flying in V-formation usually take turns at having the leading role in the flock. Researchers explained that the birds save a lot of energy by doing so, which can prove vital during strenuous, long-distance migrations.

Bernhard Voelkl, lead author of the study on migrating birds’ flight patterns and biologist at the University of Oxford, said that humanity was fascinated by the V-formation of migratory birds since ancient times. But only recently studies shed more light on how exactly the phenomenon occurs.

I’ve been waiting for 40 years for someone to solve this problem. V-formations are very, very obvious. They cannot be accidental and they cannot be trivial, because the birds do them. They do them all the time,”

Robert Trivers, a Rutgers University researcher not involved in the study, said.

Last year, Mr. Voelkl led another study on the Northern bald ibises’ V formation during their migration season. Back then, researchers found another intriguing fact – birds in the formation get an extra lift from the wake of their peers flying in front of them. So, the birds save extra energy, which on the long-run can save their lives.

But the lead role seems the most strenuous within the flock because there’s no such thing as an extra lift when leading the V formation.

To solve the puzzle, researchers from the University of Oxford teamed up with Waldrappteam, a conservation group from Austria which tries to save Northern bald ibises from extinction by raising ibis chicks in captivity and later releasing them in the wild.

The team equipped 14 ibises with GPS devices that could monitor their every move within a 20-centimeter range. The ibises were tracked for several weeks from both the ground and air, while two scientists flew nearby the flock in an ultralight flying device.

Researchers learned that each ibis wasn’t spending more than 1 minute in the leading role. The birds were switching it between one another every few seconds until every bird in the V-formation passed the role to their neighboring flight partner.

Mr. Voelkl reported that within an hour every bird performed a pair-switch with the next bird nearly 60 times. So, on a typical migration flight, every bird would do hundreds of switches. However, the moves were very subtle so a ground observer may not notice them, researchers said.

All the birds contribute almost equally to the investment in leading the flock. This was surprising to us,”