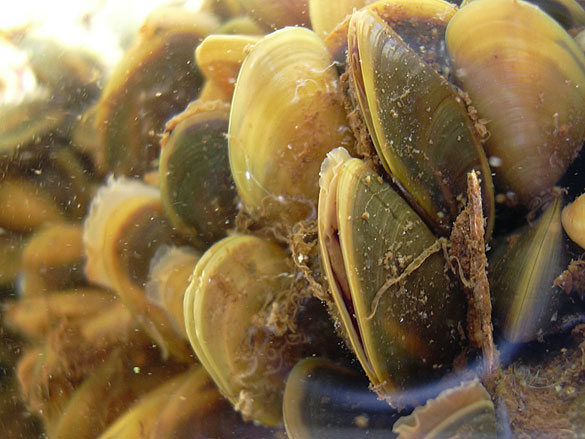 Brazilian researchers are currently very concerned about the threat a tiny mollusk posses to the natural ecosystem of the Amazon River. The mollusk, dubbed the golden mussel, came from China and was able to reach South America’s waters in the early 1990s.

Since then, the tiny Chinese mussel has been a throbbing headache for both conservationists and local authorities because it is very invasive. The adult golden mussel uses a hitchhiking-like method of moving from one place to another and it proliferates incredibly fast.

Researchers explained that it usually reproduces nine months a year by releasing clusters of larvae that are invisible to the naked eye, but can travel miles away within a river’s stream.

The tiny mussels are very threatening to the local subaquatic flora and fauna of every water system they manage to invade. They usually form large reef-like structures that can quickly alter the water’s chemical composition.

By altering phosphorous and nitrogen levels in a river, the golden mussels trigger massive blooms of toxic algae that can prove fatal for both animals and humans. For example, they annihilated the native clam species in several water systems in South America by attaching onto them and sealing them shut.

They also devastate local species and clog pipes of water treatment and hydroelectric plants. The authorities of more than four states spend millions of dollars every year to clear golden mussel colonies from pipes by using chemicals or just shutting down turbines to manually scrape them away.

Scientists compared the golden mussel to the Caucasian zebra mussel, which in the late 1980s invaded the Great Lakes in the U.S. before reaching the Mississippi River. Now they fear that the species may enter the Amazon River and start wreaking havoc among the local fauna and flora.

There’s no doubt the environmental effect would be dramatic,”

said a representative of the Brazilian government’s Embrapa research agency.

Hugh MacIsaac, a researcher and invasive aquatic expert at the University of Windsor, in Ontario, Canada, explained that, although the golden mussel may mean more food for local species of fish and ducks, the damage it can cause on long term is unimaginable.

You clearly want to keep these out of the Amazon because if they were to get in, the potential consequences are very significant. The key right now is you have to shut the door to make sure they can’t spread further,”

And a young doctoral student at the Federal University of Rio de Janeiro believes that she may have found the solution. She suggested that researcher map the animal’s genome and engineer a “bio” bullet that could make it sterile. A similar technique was used to combat dengue-transmitting mosquitoes, she argued.