You are here: Home / Tech & Science / 11,000 Double-Crested Cormorants Have to Be Sacrificed 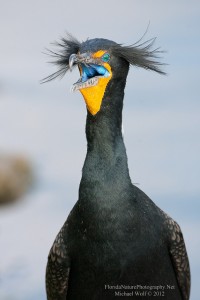 Balance is a delicate matter and it seems as though a peaceful solution isn’t always possible. Endangered species sometimes need a little bit more help from human kind. The US Army Corps of Engineers have announced that the federal government plans to save embattled salmon. Unfortunately, 11,000 double-crested cormorants have to be sacrificed right where they live, on a small Oregon island. Right now, juvenile salmon and steel-head are part of the threatened and endangered list under  the Endangered Species Act.

This certain issue is a part of a final Environmental Impact Statement that is not complete yet and will continue for another four years. At the moment, the government is awaiting the approval or denial of this proposal. If the proposal goes through, agricultural workers will have to begin shooting the cormorants and destroying the nests of these birds, in order to prevent the eggs from hatching and the birds from mating.

Unfortunately, it seems as though there is no better plan and that this seemingly violent solution is the best one. The second proposal would involve killing 18,000 birds until 2018 in order to save the salmon. US Army Corps spokeswoman, Diana Fredlund, believes that the first plan will be approved, rather than the latter.

“We are trying to balance the salmon and steel-head vs. the birds. It’s very difficult to find the right answer and so it’s taken us a long time. We’ve had a lot of experts working on it.”

Even if they also received the proposition of hazing the birds, so that they can’t off the island, Diana Fredlung doesn’t believe that this solution would solve the problem, because the birds would still cause trouble. The National Oceanic and Atmospheric Administration came up with what hey call a “Biological Opinion”. It originally stated that the sum of birds that need to be killed is 13,000, but now they reevaluated that number at about 6,000 birds or maybe less, until 2018.

The number of cormorants has grown a lot in the last 25 years, taking into consideration that in 1989 there were 100 nesting pairs on the island. Their number has now reached 15,000. In four years, the officials believe and hope that they can reduce the number at half. There will be a 30-day review starting from the 13 of February and after that, a serious decision will be taken.

“That’s a level that the National Marine Fisheries Service considers an acceptable impact on the fish.”