You are here: Home / Tech & Science / The Violent Snowstorms Sweeping the Northeast Are Linked to Global Warming 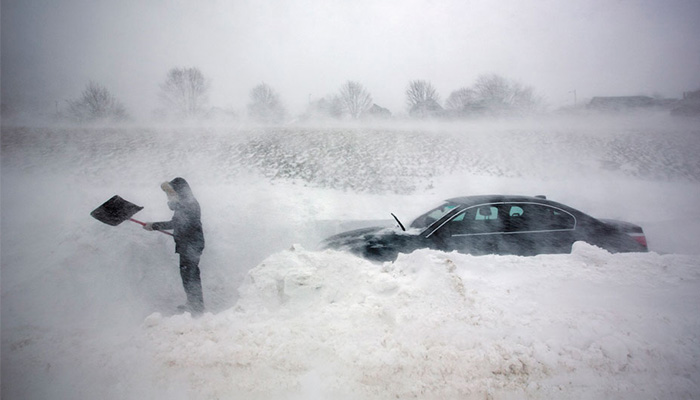 Scientists recommend that climate change skeptics don’t be over thrilled with the devastating blizzard howling across the East Coast because the event does NOT prove that climate change theory is a bedtime story. On the contrary, violent snowstorms support the theory and researchers have solid scientific evidence.

We all know that the West coast has torrential rainfalls, the Midwest gets swept by blizzards, while the South has tornadoes. But the East Coast has a combination of the events called nor’easters, or “northeasters.” A nor’easter, scientists explain, is a storm generated by a cyclone formed 100 miles (160 kilometers) off the East Coast. Later, the strong and cold northeasterly winds blow it ashore.

The National Oceanic and Atmospheric Administration (NOAA) explained that although nor’easters can form at any time of the year, they can get pretty violent during the winter season. A nor’easter usually forms when the freezing Arctic air clashes with the warm Gulf Stream air mass. The higher the difference between those two the more violent a nor’easter gets. Violent nor’easters can trigger coastal flooding, hurricane-like winds, tornadoes and blizzards, experts warn.

Climate researchers claim that the violent storms we experience these days may actually be enhanced by global warming because a warming ocean may fuel the violence of wintry nor’easters. Additionally, NOAA recently reported that 2014 recorded the warmest ocean temperatures on the record.

Michael Mann, a Pennsylvania State climate expert, said that the U.N. panel on climate change also found that nor’easter may increase in intensity due to human-caused climate change.

We also know that ocean surface temperatures off the U.S. east coast right now are unusually warm, and there is no doubt that a component of that anomalous warmth is due to human-caused climate change,”

Mr. Mann believes that the current blizzard is not necessarily caused by global warming, but climate change makes the event worse.

Kevin Trenberth, climate expert at the National Center for Atmospheric Research, provided a more detailed view on the situation:

At present sea surface temperatures are more [than] 2 F above normal over huge expanses (1000 miles) off the east coast and water vapor in the atmosphere is about 10 percent higher as a result. About half of this can be attributed to climate change.”

Mr. Trenberth recalled that a similar “Snowmageddon,” as the media dubbs it, occurred in 2010, when the Atlantic Ocean was also warmer than usual (+ 3 degrees F warmer). That situation led to “exceptional snow amounts in the Washington, D.C., area,” the scientist explained.