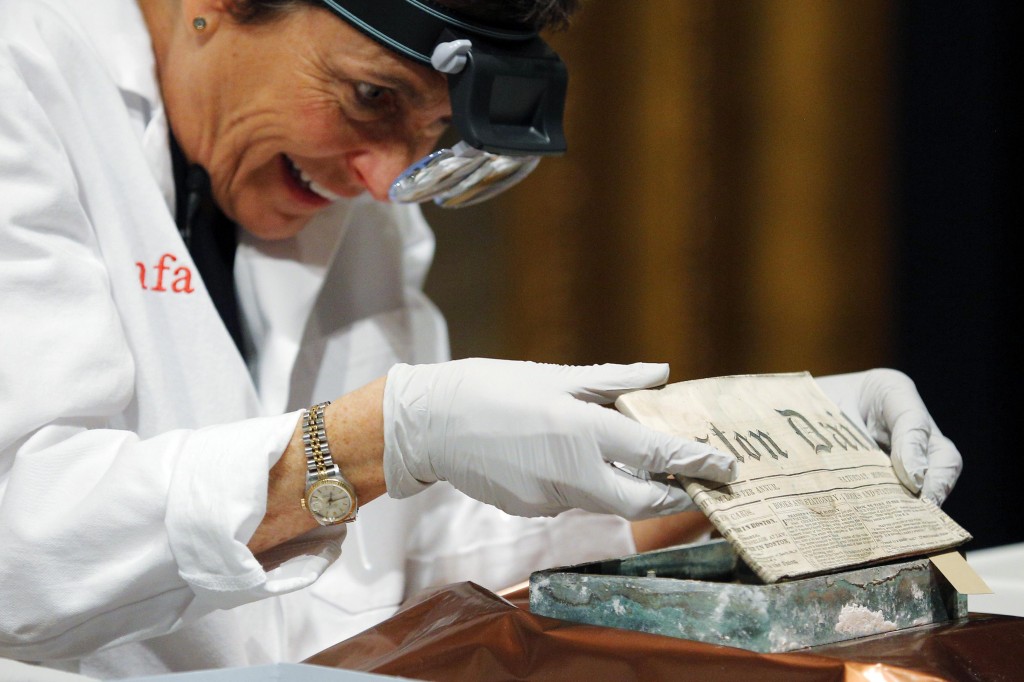 The time capsule dating from the American Revolution and discovered last month at the Massachusetts Statehouse was finally opened yesterday, Jan 7. After 220 years underground it would finally unravel its secrets to conservators at the Museum of Fine Arts in Boston.

The capsule was placed in a cornerstone of the Massachusetts Statehouse in 1795 when constructions began. It was set there by war figures including Paul Revere and Samuel Adams, governor of Massachusetts at the time.

The capsule was discovered accidentally by workers repairing a water leak at the building. They unearthed a 10-pound corroded copper box measuring at 5½ inches by 7½ by 1½. The box was immediately but under X-Ray analysis so conservators were not taken by surprise when they started going through the contents on Tuesday. One of the few curiosities still present after the X-Ray analysis was the items’ condition.

Museum of Fine Arts Boston Head of Objects Conservation Pam Hatchfield was assigned to explore the contents of the coppered time capsule. Four hours were necessary just to loosen the screws followed by another three hours needed to look through the box. The tools used included her grandfather’s dental utensils, a porcupine quill and a bamboo tool.

The findings included a copper medal depicting George Washington, five folded newspapers, a silver plaque, about 24 coins dating from 1652 to 1855, including half-cent, one-cent, half-dime, 10-cent and 25-cent coins and the seal of the Commonwealth of Massachusetts.

Among the coins there was one dating from 1652 – the pine tree shilling used in a time when the colonies were not permitted to have their own currency.

The silver plate had a message from Paul Revere, Samuel Adams and William Scollay engraved on it.

The original capsule was made of cowhide. According to Hatchfield, the box was initially dug out in 1855 when some changes were made to the building.

William Galvin Secretary of State, after studying the notes made at that time, believes officials treated some of the items with acid before moving the content in a copper box.

He added that, according to the records, the box was put back in its initial place on a humid day. Although that specific corner of the Statehouse has had water leakage problems for decades, Hatchfield said that the newspapers were found in an “amazingly good condition”.

The capsule and its content will probably be displayed at the museum for a certain period of time after which the box will probably be returned to its original place for future generations to discover.

He didn’t know if any modern items would be added to the capsule.
Image Source: The Japan Times