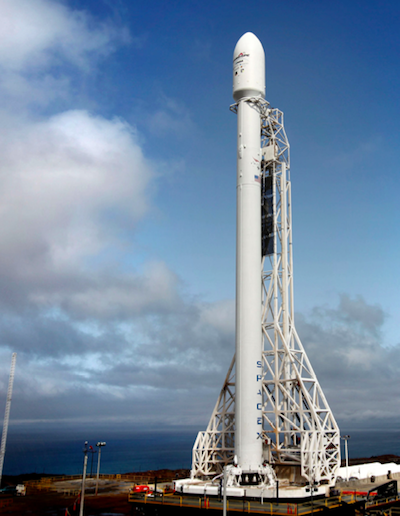 SpaceX canceled the Falcon 9 rocket launch minutes before take-off due to a technical error detected at the booster’s upper stage motor, which led to one of the computers activating the automatic abort.

One of the mission’s goals was to send the Dragon cargo capsule carrying more than 5,100 pounds (2,313 kg) of food, supplies and equipment to the International Space Station with the help of the Falcon 9 rocket. Among the equipment there is an instrument designed to study clouds and aerosols in Earth’s atmosphere.

Today’s mission was also meant to evaluate the reusable rockets ability to land in a precise area after delivering the capsule to the space station.  The Falcon 9 rocket is supposed to vertically land on an “autonomous spaceport drone ship” positioned off Florida’s East Coast with the help of its X-wings. These hypersonic fins are placed in an X-formation and can be independently controlled for pitch, permitting a better aimed landing.

In comparison to other occasions when the rocket was tested in soft landings, the Falcon will now have to come down on a much smaller spaceport. Up until now, the rocket’s landing accuracy has been about 10km. This time, it will need to land with an accuracy of 10m.

The drone is 300 by 100 feet with wings that extend to a width of 170 feet.  So in order to safely land a rocket of such dimensions on a small platform, besides accuracy, the Falcon 9 will need to descent with a speed of 2m/s in comparison to the initial 1300m/s. This will be achieved by reigniting the rocket’s engines.

If all goes as planned, NASA engineers will have managed the first ever landing on a floating platform and SpaceX will have built a fully operational reusable rocket.

Although some spacecrafts can be reused, its most expensive part, the rocket has to be replaced after every mission. And as SpaceX vice president Hans Koenigsmann stated in a conference: “If you were to throw the airplane away after every trip you take, it’s going to be expensive.”

Reusable rockets could make a huge difference in terms of cost, thus casting off one of the major problems regarding manned missions.

Nevertheless, there is only a 50/50 chance for the Falcon 9 to successfully land on the platform.

The launch was reprogrammed for Friday morning at 5.09am EDT (10.09am GMT).
Image Source: Spaceflight Now