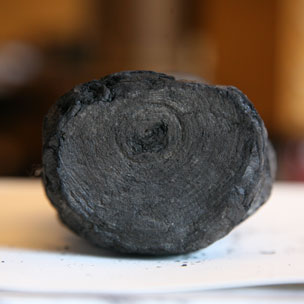 2,000 year old Vesuvius scrolls were found in a Herculaneum villa in the 18th century, but they could never be read because they were charred by the hot lava from the 79 (A.D.) Mount Vesuvius explosion.

From the moment they were found, scientists have tried to read them but it was impossible, until today. Thanks to a new X-ray based technique, the charred texts can be read without having to unroll them, which would cause irreparable damage to them.

Co-author of the study, Vito Mocella, a physicist at the National Research Council in Naples, Italy worked hard at creating a method that would decipher the scrolls. He said that one of the main issues that prevented the reading of the 2,000 year old Vesuvius scrolls was, aside from the fact that the scrolls were charred, the fact that the people who wrote them, used an ink with a material that comes from smoke. The paper was also burnt, which make the ink and paper indistinguishable.

The new method that is going to be used at deciphering the 2,000 year old Vesuvius scrolls has worked on six scrolls that were given to Napoleon Bonaparte.

The present scrolls are still being deciphered and the scientists are very optimistic. The technique in question is called X-ray phase-contrast tomography and the science behind it is quite simple. The X-rays hit the letters on the scrolls which are naturally slightly raised on the charred paper. By measuring the difference between the raising of the letters and the flatness of the paper gathered by the X-rays then the scientists managed to decipher some letters and writing on the 2,000 year old Vesuvius scrolls.

What the scientists did manage to decipher was a sequence of Greek letters that spelled P I P T O I E (Pi-Iota-Pi-Tau-Iota-Epsilon) in the top of the scroll and at the bottom: E I P O I (Epsilon-Iota-Pi-Omicron-Iota).

The technique is far from being perfect, but Dr. Mocella is working hard at perfecting it. The work so far was very time-consuming and it did involve a lot of guesswork, because the hardened lava did not just char the scroll, but it fused it together.