You are here: Home / National News / Sarah Palin Fires Back at PETA for Criticizing Her Family Dog Photo 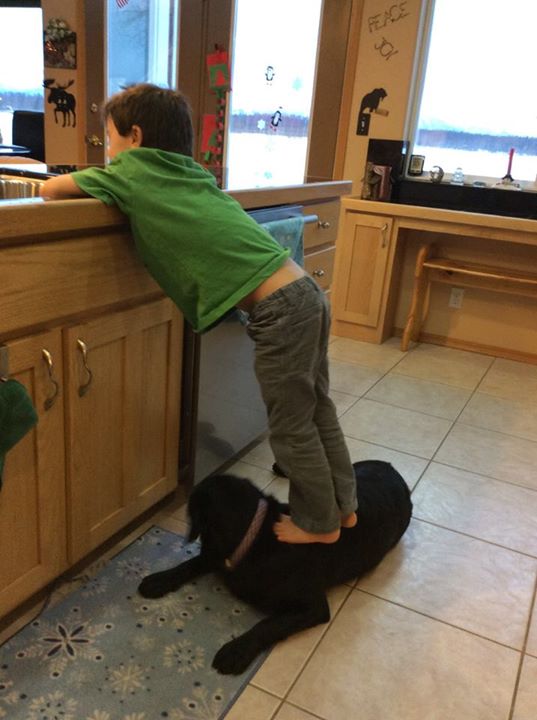 Sarah Palin’s New Year’s Day post on Facebook went viral after uploading three pictures of her son Trig using the family dog as a stepping stool. A lot of commenters were simply outraged by the boy’s deed calling Sarah a vicious mother that would never get elected for President.

In her post, Mrs Palin wished everyone a Happy New Year! in which every “stumbling block” may be turned into a “stepping stone on the path forward” just as her son, Trig, turned the lazy family dog blocking his way in the kitchen into a stepping stone.

The crowd got infuriated. Many said that the boy was oppressing the dog, although the photos revealed clearly that the animal showed no distress. Other users explained that a Labrador Retriever was sturdy enough not to feel a six-year-old’s weight on its back. And if the dog was indeed distressed, it would have moved or bitten the boy. But no one seemed to listen.

On January 2, Ingrid Newkirk, PETA President, said in an interview:

“It’s odd that anyone — let alone a mother — would find it appropriate to post such a thing, with no apparent sympathy for the dog in the photo. Then again, PETA, along with everyone else, is used to the hard-hearted, seeming obliviousness of this bizarrely callous woman.”

PETA President was referring at an interview Sarah gave 7 years ago in a turkey farm, while the birds were slaughtered in the background.

In a lengthy message defending her son, Mrs. Palin criticized PETA in return for having “hypocritical” and “flighty standards.” She told People for the Ethical Treatment of Animals that they didn’t go berserk when their “heroic Man-of-Your-Lifetime”, Barack Obama, publicly said that he did enjoy eating dead dog meat.

She also said that PETA warriors should stop being so outraged by her photos since many of them have pets that thrive in the “concrete jungle” of a city where they are allowed to pee and breathe outdoors maybe once a day.

Mrs. Palin said it was a shame PETA had such a reaction since everyone agreed on the fact that the “true meaning of its mission was to respect God’s creation and critters”.

Sarah concluded that not only Jill, the family dog, but also Trig, the youngest Palin son, was a “precious part of our world”.