You are here: Home / National News / Researchers claim another reason behind the dead zones in the Great Lakes 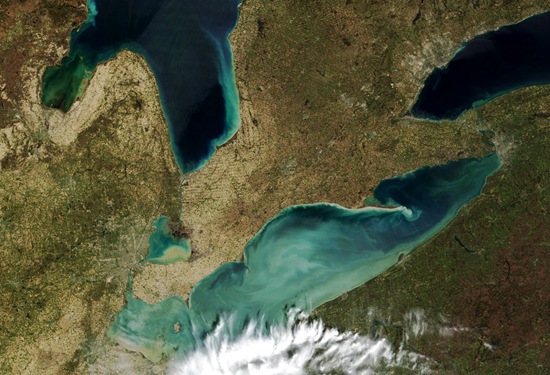 Apparently there is another reason behind the dead zones in the Great Lakes. A new study revealed that weather also played a major role in their formation. Up until now, the main reason behind this recent event was considered the high levels of phosphorus in the lakes.

A dead zone can be defined as an inhabitable aquatic area. Due to very low levels of oxygen in the water, fish and other life forms have nothing to feed on.

In order to find out more about these dead zones, scientists focused their research on Lake Erie, the smallest of the Great Lakes. The lake has been gradually degrading for more than four years. This environment once blooming with life has now turned into a hazardous zone. In 2011 scientists noticed an abnormal level of algae.

Anna Michalak, lead author of the study and researcher at the Carnegie Institute for Science, explained how this phenomenon occurs in humid areas, when the levels of nitrogen and phosphorous in the water are alarmingly high, creating an over-nurtured environment perfect for growing toxic algae.  She added that this is usual in layered masses of water when a warmer layer of water is placed over the cooler mass, preventing oxygen from reaching the deeper portions of water.

The excess was thought to be caused by agricultural fertilizers dumped in the lake.

The process continued with algae using up all the nutrients in the lake, leaving the fish with nothing to feed on. 2012 was the year dead zones appeared. The deterioration got so serious that in August 2014, Toledo had to shut down its water supply coming from the Great Lakes due to toxic levels of algae in the water.

Up until now, no one has thought that climate change might be the bigger cause behind the phenomenon.  According to a study conducted by the researchers from Carnegie Institution, the dead zones were not created through high levels of phosphorous alone. Weather conditions such as drought also played a major role. The findings show that wind speed and the low quantity of water acquired from tributary sources have also led to the lake’s current condition.

Scientists advised authorities to investigate both the changes resulted from the dumping of fertilizers and those generated by the changes in weather.

Lead researcher Anna Michalak stated that in order to stop the degrade changes must be made in agricultural practices and in the weather conditions.
Image Source: WBEZ