You are here: Home / Uncategorized / New Sony FDR-AX33 Handycam Unveiled at the 2015 CES 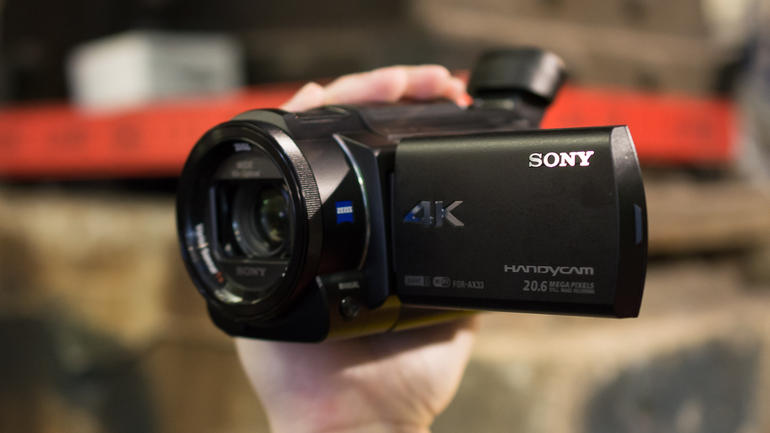 The most talked-about tech event of the year was the 2015 CES held in Las Vegas, where all the tech giant companies presented their latest products. One of those companies was Sony, which revealed what they called “the most compact 4K Handycam” ever released by them. The new recording device is called Sony FDR-AX33 Handycam and it made a good first impression because of its size and weight.

The new Sony FDR-AX33 Handycam is smaller and lighter than the previous FDR-AX100 4K camcorder by approximately 30% and 20%, respectively.
Sony said that the new camcorder features a new technology called Balanced Optical SteadyShot or BOSS, which is the company’s latest image stabilization technology. The BOSS technology can reduce the blur when recording a 4K video, Sony says.

The new Sony FDR-AX33 Handycam can record a 4K video in a format called XAVC S, which has a high bit rate of 100 Mps. In order to work, this requires an SDXC UHS-I U3or a higher capacity card.

The manual button and the manual ring can be customizable according to what the user needs. The camcorder comes with a 3.0-inch LCD, called “Xtra Fine LCD WhiteMagic”. Sony said that the electronic viewfinder has a three times better resolution than on their previous cameras. The user can extract a still image from the 4K video with a resolution of up to 8.3 MP.

Patrick Huang, a Sony representative said that the 4K resolution is increasingly popular and users and looking for new ways to enjoy this video platform. Huang added that the new Sony FDR-AX33 Handycam brings new features to the 4K video platform, like crystal clear video quality. He said that the new Sony Handycam is perfect for families who are looking for a small, lightweight camcorder to capture all those precious family moments in the best video quality.

The new Sony FDR-AX33 Handycam will be put on sale from February and it will cost $999.
Image Source: cnet