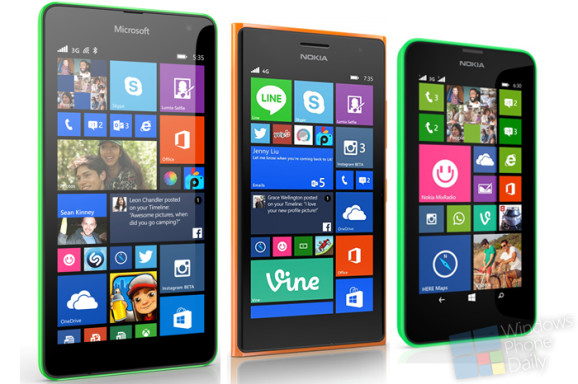 The release of the new Microsoft Lumia 435 follows the more high-end editions like Lumia 830 and Lumia 930 released earlier this month. Microsoft’s new Windows Phone is the cheapest Lumia smartphone to date and costs $81. Before Lumia 435, the Microsoft phone with the lowest price was Lumia 530, which was released last year. The 530 smartphone had less RAM but featured the same type of processor.

The new Lumia 435 will hit the stores in early February, but for now it will be released only in Europe, Asia, Africa and the Middle East. Microsoft has not revealed any US release date but they will most likely announce it in the near future.

The new Lumia 435 resembles the Nokia X, in terms of design and runs on Google’s Android One, which was launched last year in September. Android One was also featured on other low-end phones like Spice, Micromax and Karbonn. These smartphones cost less than $100.

In order to reach this low price, Microsoft had to make some compromises in terms of specifications. The Lumia 435 does come with two cameras, a front camera that can be used for Skype calls, that only has a 0.3 MP sensor and a rear camera with a 2 MP video sensor.

The new Lumia 435 will include Windows Phone 8.1, Cortana, Live Folders, Apps Corner, but it will not have Action Centre, which is Microsoft’s notifications center. Luma 435 will also feature Microsoft Outlook, PowerPoint, Excel and Word already installed.

Other important specifications the Lumia 435 has include the 1.2 GHz dual-core Qualcomm Snapdragon processor, a WVGA display of four inch and a resolution of 800×400 pixels and a 23 ppi pixel density.
The new Lumia 435 also has 8 GB of storage that can be extended to 128 GB more using the microSD card slot. The new Microsoft smartphone sports 1GB of RAM and a battery of 1560 mAh.
Image Source: mobicrunch