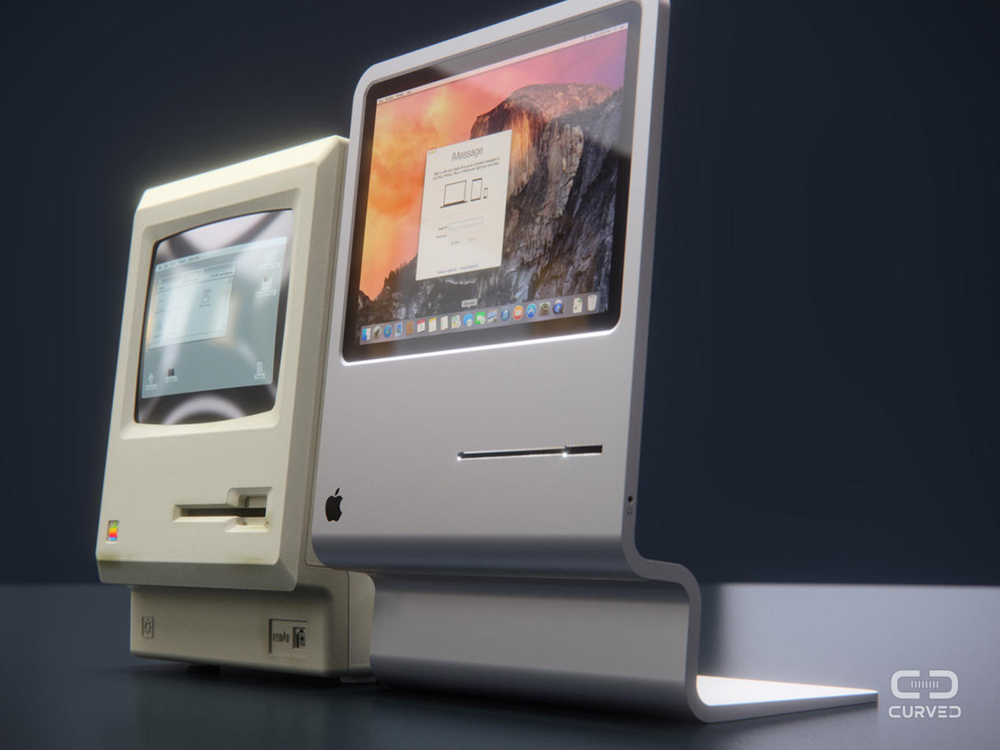 German tech website Curved Labs have revealed a fantasy and futuristic design presenting their own Mac 2015 concept. The device is not real, nor will it be, and it was created by Curved to celebrate Macintosh’s 30th birthday on January 24.

The team of designers from Curved Labs drew the inspiration for this Mac 2015 from Apple devices of the past and present. The new Mac 2015 concept creation is similar in shape to the first Macintosh computer that was presented to the world by its creator Steve Jobs in January of 1984. But that’s about where the similarities stop. The new Mac 2015 concept device is made from an anodized aluminum body and is similar to the present day iMac.

The Mac 2015 concept computer has a touchscreen display and can allow users to switch between a mouse and the touchscreen. The team who worked to create the concept revealed that:

The technological basis for the Curved/labs-Mac are components of a current MacBook Air with an 11-inch screen. However, we have transformed it into a touchscreen. You can choose whether to control it via mouse and keyboard or directly type on the 11.6 inch touchscreen.

The original 1984 Mac was called Apple Macintosh Original and it featured an 8 MHz 68000 processor, had a 400k disk drive, a 9 inch monochrome display and a measly 128k of RAM. It was the first fairly inexpensive computer to use 3.5’’ disks and a graphic user interface. It was the computer that changed the way people viewed computers, which is why Curved Labs chose to celebrate the Apple computer with their design.

The Mac 2015 concept device has an internal storage of 128GB and an Intel i7 processor. To follow Apple’s trend of providing their devices in various colors, Curved Labs also made their concept available in silver, gold and grey.

The latest MacBook Air was launched in 2014 and Apple is expected to launch a new model of their thin personal laptop in the summer of 2015. But the iMac, the device that bears some resemblance to the Mac 2015 concept will also get another model this year. Will it look anything like what Curved Labs created? Possibly not, but that’s not why the team at Curved Labs created it.