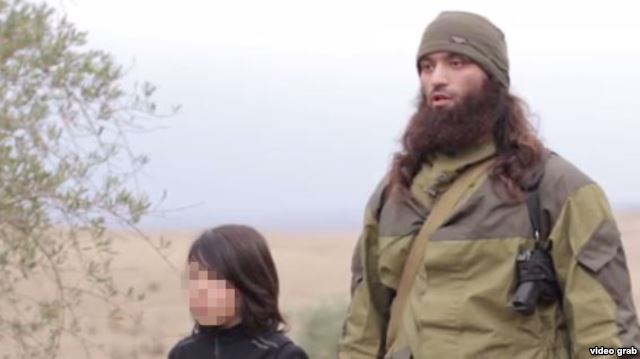 Russia refused to comment on the authenticity of the video, while the Federal Security Service of Russian Federation (FSB) said it didn’t know the two men being executed. However, Russian diplomats in Damascus are conducting an investigation.

Isis claims that the two men were Russian spies who had tried to infiltrate the militant group on Syrian territory.

At the moment, we have no information that the men portrayed [in the video] are Russian citizens,”

said Oleg Samochkin, a representative of the Russian Embassy in Damascus.

The video was published on the YouTube by the al-Hayat Media Center, a media outlet of Isis, but it was deleted soon afterwards.

The two men in the Isis video are Sergei Ashimov, 30, and Jambulat Mamayev, 38. Both men identified themselves and confessed what they were doing on Syrian territory. It seems that Mr. Ashimov was a Russian citizen sent to Syria to assassinate an Isis soldier and find where its leader lives, while Mr. Mamayev was a resident of Kazakhstan sent to Syria to gather intelligence on the extremist group.

Soon after the two identified themselves, a long-haired young boy points a handgun at the back of the two knelt men. Next to the boy there’s an adult Isis soldier, heavily armed.
When the child was about to pull the trigger, another person shouts from off camera:

We say to all those tempted to spy on the secrets of the Muslims and mujahadeen, we will have no leniency and no mercy on you.”

Seconds later, the little boy executes both men. However, that part of the video seems to be heavily edited.

The same boy featured in another Isis video in late November. That video was designed for training purposes, and it was also deleted from YouTube. In that video, several Isis child soldiers said that they were from Kazakhstan and Isis soldiers were teaching them how to use automatic rifles.

I will be the one who slaughters you, non-Muslims,”

the mysterious 10-year-old said in that clip.

Charlie Winter, an anti-extremism expert said Isis used a child in their video exclusively “for the shock factor.”

Mr. Winter explained that Isis’ propaganda center has previously used images of children being trained as soldiers and getting punched while performing martial arts moves. However, the latest video is entirely different from the past ones, Mr. Winter also said.