You are here: Home / Tech & Science / Curved Displays Will Soon Be the New Trend in PCs 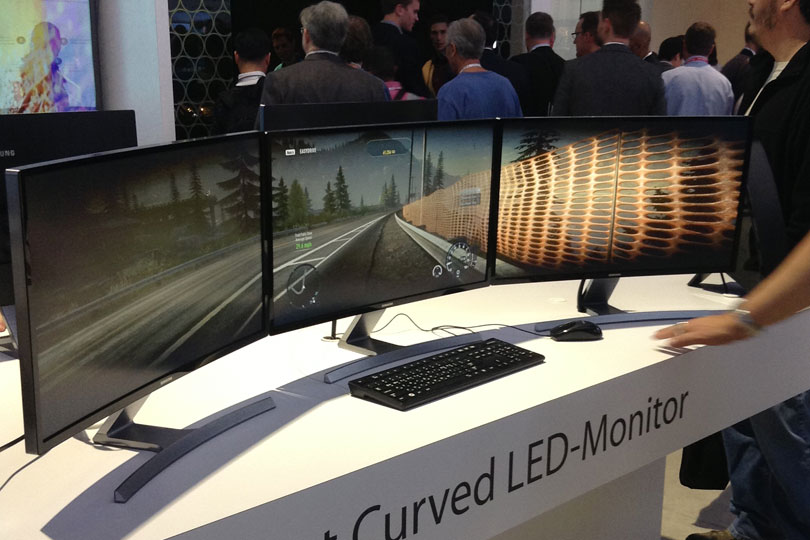 Curved displays seem to be the newest trend when it comes to TV’s. But as it could be seen in Las Vegas at the International CES, curved monitors may hold more value in the PC industry.

The viewing experience is promised to be a unique, intimate one, although the monitors very much resemble plain LCD screens and the curvature is barely noticeable.

Only by attentively inspecting the screens does the difference between a flat monitor an a new curved one become evident. Upon first trying to view a curved display, a customer may be a bit shocked and may require a couple of minutes to get used to what he or she is experiencing. According to the product manager at Samsung, David Ng:

“When you get used to it and you spend time with it, you appreciate it even more.”

Officials from several tech companies have acknowledged that most people would find flat screened TVs and PC monitors perfectly efficient for their use. However, companies put their hopes in the niche segment of consumers, the professionals and tech enthusiasts. These are the kinds of people companies’ representatives hope to bring on huge sales.

The reason for which PC curved monitors are predicted to stick around more is that PC users sit closer to the screen. A curved display brings the pixels and edges much closer to the viewer, which turns the experience from common to a unique one. TV’s are usually used by a few people at once, from a bigger distance. That incapacitates people from experiencing the capabilities of the curved monitor. As Bob O’Donnel, the principal analyst at Techanalysis Research, said, the curved display works against the viewers, when it comes to TVs.

It was also demonstrated that curved monitors work extremely well in multi-screen arrangements. For example, four curved screens put next to one another can bring forth a more comfortable and natural angle for the human eye.

Samsung has, until now designed several curved TVs and is now, as a logical step forward, has implemented that same technology to computers. The company has released it’s $1,299, 27-inch Ativ One 7 all-in-one PC and is planning to continue working with curved displays in the computer domain.
Image Source: BT