You are here: Home / Technology / YotaPhone 2 is Scheduled for Shipping in 20 Countries 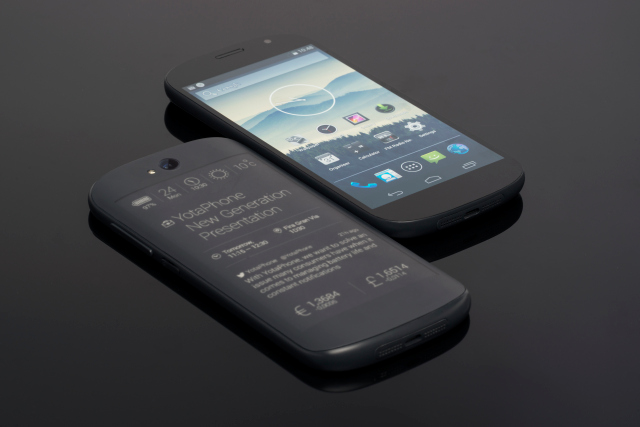 The YotaPhone 2 is scheduled for shipping in 20 countries after being released  Wednesday in UK.  The world’s second smartphone with an electronic display has returned with new and improved features.

For  £555 (about $872), enthusiasts can pre-order the phone from Yota’s  online platform but if they wait its arrival in shops they can have it for  €700 in Europe and the Middle East.

According to Yota representatives the device will also be available in in Hong Kong by the end of December. China and Taiwan are to receive it sometime in the first quarter of 2015. Only after the phone arrives in these countries it will be sold in the U.S., Canada and Latin America.

The upgraded version of the smartphone has an e-ink screen differentiating it from its precursor.  On the new devices users can read text and check their inbox or the time without too much battery waste.

Another key feature is sending  information from the main screen to the back where it will remain even after the battery flats out.

With a 5-inch 1080p AMOLED screen and a 4.7-inch e-paper display  the phone has an user friendly interface enhanced by  a Snapdragon 800 processor, 2GB of RAM, 32GB of storage, an 8-megapixel front-facing camera, and a 2500mAh battery.

Its predecessor was initially a captivating alternative to more traditional smartphones  but drawback like limited stocks and weak hardware prevented it from achieving much.

Similarly to its predecessor this device has a “dual-display” design but its shape is more  ergonomic and is easily comparable with a Galaxy Nexus thanks to the discreet curves of the display..

The two Gorilla Glass-protected screens are a perfect combination with one working as any other smartphone screen and with the other enhancing its use. The always-on paper display allows users  to both read and mirror the apps on the regular screen. Even more, panels to access apps and contacts can be directly configured via the paper display

The producing company said the devices has an up to five days battery life if used as an e-reader and a two days life span if the paper display works as  a smartphone.

Compared to Amazon Kindles, the gadget has higher resolution with 235ppi (pixels per inch) while Amazon’s Kindle Paperwhite has only 212 ppi. However Paperwhite is still on top thanks to the 6-inch screen size, making it a more comfortable reading option. Also the price of a Kindle with Amazon is way smaller that of YotaPhone 2. However kindles are just Wi-Fi readers and cannot be used as phones.