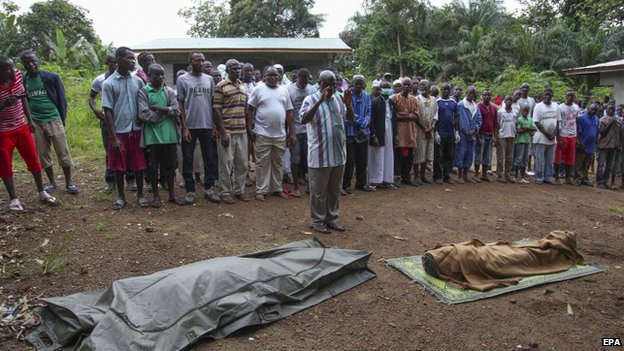 In Sierra Leone, health officials are now struggling to change traditional burial practices into safer ones since up to 70 percent of Ebola cases in this country were caused by unsafe burials. Doctors say that teaching people to wash their hands or avoid standing in crowded places was a relatively easy task compared to the new challenge of changing African burial mentality.

If I die, I want the deaths to stop with me. I want to give my family the permission to request a safe and dignified, medical burial for me,”

This new campaign aims at making people aware that traditional unsafe burials in Sierra Leone including practices such as washing the dead body by family or touching it before putting it in a graveyard fuel the spread of Ebola in this country.

WHO reported that in Sierra Leone, there were 6,975 confirmed Ebola cases and about 2,200 deaths caused by the epidemic. Sierra Leone is currently the West African country with the fastest rate of Ebola spread. Health officials are now desperate to change traditional burial practices and even threaten people to jail if they do funeral preparations to their family members.

However, old habits die hard. Africans believe that if a proper burial is not conducted the spirit of the deceased would come and haunt the family. Funerals are an important social custom not only in Sierra Leone, but also in Guinea and Liberia, two other countries ravaged by Ebola.

When a funeral occurs, relatives and close friends to the deceased often travel miles away from their home to attend the burial service. But, when returning home they may also bring with them the deadly virus. That often results in another funeral that also gathers people from far distances that also get sick and die. And so Ebola never stops from spreading, experts say.

Representatives of the International Federation of the Red Cross explained that the body of an Ebola victim can get 10 times more infectious than that of a living carrier of the deadly virus. The main reason for it is that at a funeral many people touch the body when preparing it for burial or saying goodbye to it, then get the virus, and later carry it to their homes, according to Rebecca Bunnell, a CDC epidemiologist.