You are here: Home / Tech & Science / The Large Hadron Collider at CERN Will Power Up in March 2015 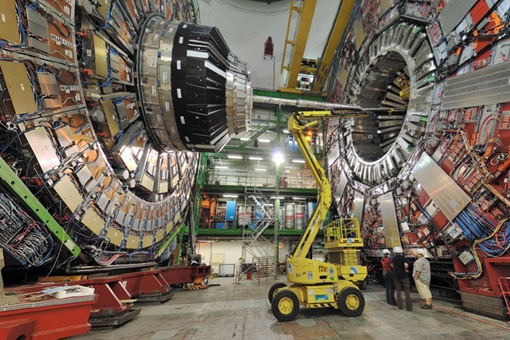 The Large Hadron Collider located at CERN will be operational for the second time after two years of upgrades. LHC will be powered up in March 2015 and will be twice as powerful as before, experts say.

LHC is located in Geneva, Switzerland, and it’s the most powerful particle accelerator that was ever built by humankind. Experts at CERN ( European Organization for Nuclear Research ) have worked hard for the last two years to refurbish this device. This will be the second 3-year run for the Large Hadron Collider and experts hope the new upgrades installed will shed a new light on the mysteries of physics.

The Large Hadron Collider is made from superconducting magnets and huge detectors. The main ring of this massive machine is 17 miles long ( 27 kilometers ) and it must be cooled down to optimal temperatures for it to start again. The optimal temperature of the device is 1.9 degrees Kelvin, which means -271.25 degrees Celsius.

Experts say that while the powering of the machine will begin in March 2015, it could take a month for all its components to be charged individually. Scientists are confident that they can start colliding particles in May 2015, and they hope that this time the power of the Large Hadron Collider will be doubled and could reach up to 13 TeV.

CERN Director Rolf Heuer said that if they will succeed in achieving the energy level they desire, the Large Hadron Collider could help scientists understand and achieve new breakthroughs in the field of physics and future discoveries as well. He also expressed how excited he is to see that the future holds for mankind.

Director for Accelerators and Technology at CERN, Frederick Bordry, said that the amount of work and upgrades towards this device made it a totally new one and he is confident that everything will run smoothly and the device will begin proton-proton collision in May 2015.

Scientists also hope that the Large Hadron Collider will help them understand dark matter particles, antimatter interactions and more. Also, they expect that new exotic particles will be discovered with the help of the most powerful particle accelerator ever built.