You are here: Home / Tech & Science / Scientists are Trying to Understand “Enigmatic Landform” on Mars 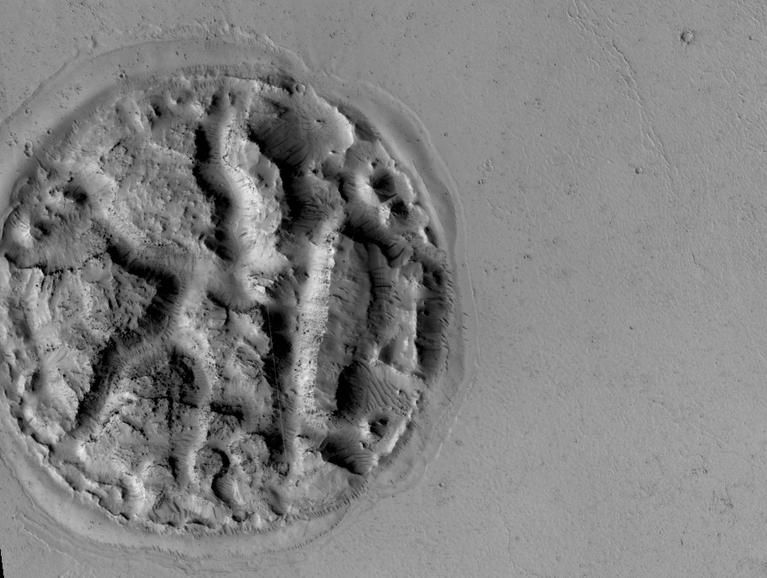 Scientists are currently trying to unveil the mystery behind an image of an unusual circular formation on Mars. An image captured by the Mars Reconnaissance Orbiter reportedly represented what NASA described as an “enigmatic landform.” NASA also referred to the formation as resembling a “circular island.” while some have noted it looks a lot like a human brain, a wart or a deformed waffle.

They’re talking about a 1.2-mile wide circular formation that sits in the Athabasca region of Mars.

It basically looks like a circular island surrounded by a wide region of smooth-looking lava flows. The region where the strange formation was spotted is called the Athabasca Valles and it is a geologically young 300-km-long outflow channel system located in north-central Elysium Planitia. This region of the Red planet contains some of the youngest lava flows on the planet and is thought to be 500 to 100 million years old.

This isn’t the first time formations spotted on the surface of Mars that have caused a fuss. Astronomers had also been intrigued by the Martian Face, only to discover that it was just a bad case of pareidolia. Some other time NASA’s Curiosity rover discovered a round ball on the surface of the planet and then captured indications of a queer, unnatural light emanating from inside the surface. The light beam reportedly came from a camera imaging artifact, while the ball was reportedly created as a consequence of a standard concretion process.

However, as far as the wart is concerned, they still don’t know exactly what it is.

“It is highly possible that volcanism played a role in creating this feature,”

“Perhaps lava has intruded underneath this mound and pushed it up from beneath.”

They also added the fact that it looks like there is material missing from the mound, so they suppose this could have been a significant amount of ice that was pushed away by the heat of the lava.

The formation was snapped by HiRISE one of six instruments on NASA’s Mars Reconnaissance Orbiter and the first photograph of the formation was released by NASA on Wednesday, Dec. 3.