You are here: Home / National News / Peru is Outraged after Environmental Group Marked an Ancient Site 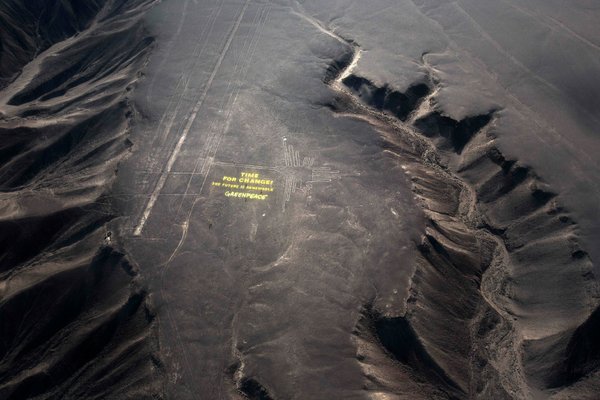 Peruvian authorities were outraged after Greenpeace, an environmental group marked an Ancient site near the Nazca lines. On the other hand, Greenpeace’s executive director assured authorities that this stunt had not been officially conducted and apologized for the actions of the group.

As the Lima Climate Change Conference was underway, several activists decided to resort to extreme maneuvers in attracting the attention of world leaders gathering up for the conference. Authorities report that the perpetrators managed to enter the archaeological area, a restricted region located 225 miles south of Lima, and to lay a bright, yellow sign reading “Time for change! The future is renewable” on the floor.  According to statements made by authorities, the damage done to the world-known site is irreversible.

Kumi Naidoo flew to Lima to personally address the situation and to apologize to Peruvian authorities. Jaime Castillo, vice minister for Peruvian cultural heritage warned that his country was not ready to accept any form of apologies after activists’ actions scarred Peru’s most treasured symbols.

The warning sign placed on the ground by Greenpeace activists was positioned near the set of lines portraying a hummingbird. According to experts, the Nazca lines were created by ancient Peruvian civilizations thousands of years ago and represent enormous forms of art stretched over hundreds of feet. Mr. Castillo explains that the hummingbird was, perhaps, one of the best preserved of the Nazca lines. 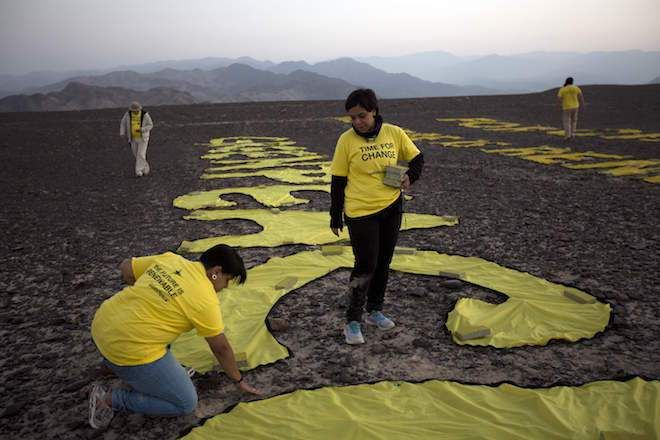 Tragically, Mr. Castillo added, there is no technique that specialists can use to restore the hummingbird to its original state. “The hummingbird was in a pristine area, untouched,” he said.

Authorities will continue to search for the activists responsible of desecrating this most sacred of places and if found guilty, they could face up to six years in prison. The restricted area may only be entered after special authorizations are received, Mr. Castillo told reporters, and even then, special footwear must be worn.

In order to correctly assess the damage done, authorities sent out drones equipped with video cameras, so as to not further disrupt the area. Peru’s cultural heritage vice minister was indignant, claiming that these events would forever scar the Nazca lines, forever associating the country’s cultural heritage with Greenpeace’s scandal and lack of respect for national symbols.