You are here: Home / Health / New Anti-smoking Campaign – Cigarettes Rot The Body From The Inside 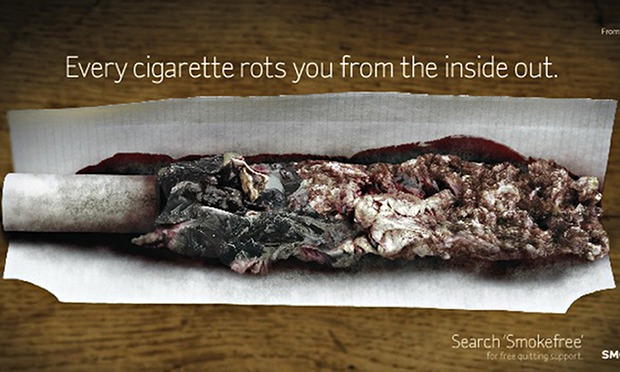 A new anti-smoking video released in the UK by the Department of Public Health warns smokers about some of the lesser known dangers of rolled cigarettes. The campaign also includes billboard posters displaying the effects smoking has on ones, brain, eyes, muscles and teeth, cigarettes basically rotting the body from the inside.

Common smoker knowledge states that it is cheaper and less harmful to smoke hand-made cigarettes rather than the manufactured versions. This is, however, false.

Prof. Dame Sally Davies, Chief medical officer stated that all tobacco items, including hand-made cigarettes are equally harmful. She added that all cigarettes whether manufactured or hand-made are “are basically decaying from the inside”.

According to a study conducted by Public Health England (PHE) every gram inhaled from these cigarettes are just as harmful as the manufactured ones.

Another set of data released by Health authorities showed that rolled-up cigarettes are becoming more and more popular amongst smokers. The number of male smokers using hand-made cigarettes has risen from 18 % in 1990 to 40% in 2013. Female smokers are just as keen on using this type of cigarettes. Data collected during the same period shows a powerful increase from 2% to 23%

In the effort of raising awareness regarding the effects of smoking rolled-up cigarettes, PHE came up with a new campaign consisting of billboard posters displaying graphic images of what smoking does to various tissues and organs such as bones, brain, eyes, muscles and teeth.

According to PHE, smokers today are 59% more exposed to Alzheimer’s and have a 53% higher risk of developing cognitive disorders. They also have a 25% higher chance of breaking bones. The danger increases to 40% when it comes to hip fractures. In addition to this, smokers are 79% more inclined to develop chronic back disorders.

Although the number of smokers in England reached a historic low in 2014 with a rate of 18%, this vice is still the main causes of avoidable sickness in the country, taking the lives of about 80,000 smokers annually. Out of 10 old smokers, 5 will die rashly due to a smoking-related illness.

In one of the advertisements, the father watches over his two children as they play. Before sitting on a bench he starts rolling a cigarette, but instead of tobacco, it contains the decaying tissue of his lungs.

Officials considered that this was an appropriate period to start the campaign. As New Year approaches, many smokers consider giving up this habit. The ads will most likely give them a reason not to give up on their resolution.
Image Source: The Guardian