You are here: Home / Tech & Science / How Electric Eels Shock Their Prey into Submission 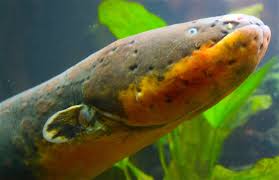 A curiosity that has been on the minds of scientists since the 18th century has finally been revealed: the mystery of how electric eels shock their prey into submission.

According to a recent study, the animal emits low-level charges that easily take over the nervous systems of nearby fish or frogs. In fact, eels incapacitate their prey by zapping nearby animals with 660 volts of electricity. And it’s not the voltage that is impressive. The emitted electricity is used to remotely control prey in the eel’s vicinity. They induce involuntary spasms in the unlucky animal, revealing its location and preventing its escape.

In all fairness, Electric eels, or Electrophorus electricus are technically fish. They represent one of the few electrical fish species. 80 percent of their bodies are comprised of specialized cells acting as bio-batteries. Such specialized cells are called electrocytes. The eels frequently surface for air and during the dry season, special mucous membranes located in their mouths absorb oxygen from the air, aiding in the eel’s survival.

The study was conducted under the leadership of Kenneth Catania, a professor of biology at the Vanderbilt University and will be publish in this week’s issue of Science. Catania has a vast experience in mammal sensory systems as well as nervous system organization. Previous work conducted by Catania involves star-nose moles, animals who use fleshy appendages when navigating underground.

According to Catania’s work, the eels can work differently depending on their purpose. When they are attempting to reveal an animal’s location, they emit short electrical impulses so that the animal twitches, causing it to reveal himself. When they have identified the frog or fish about to become dinner, they cause maximal muscle contractions by emitting electrical current, so that the animal is no longer able to escape.

Such electric eels only live in South America, Catania says, and can reach lengths of up to 7 feet. After identifying these details about the eel’s hunting mechanisms, Catania wanted to see whether they had caused human deaths. There were no records to suggest that such deaths occurred.

“I would imagine that the eel would be able to inactivate anything it would fit in its mouth,”