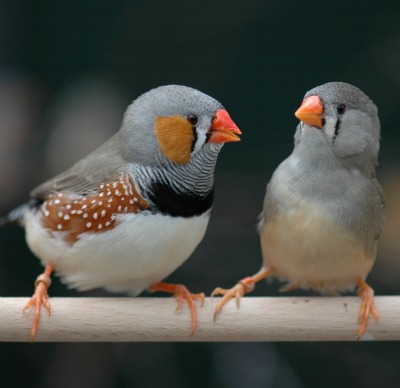 Oregon scientists got several lab zebra finches tipsy and analyzed their song to learn more about speech impairment caused by alcohol. They found that drunk birds slur songs just like humans slur their speech after too much drinking. The study was published in the on-line scientific journal PLOS ONE last week by a team of scientists from the Oregon Health and Science University.

For the study, scientists got several zebra finches drunk by pouring into their daily dose of juice several drops of alcohol (about 6 percent). Blood tests showed that most of the birds were on a risky level of blood alcohol concentration (BAC) of about 50 to 80 mg/dl when the experiment was conducted. One single bird approached >80 mg/dl level of alcohol. In humans, >80 mg/dl is considered positive for driving under the influence in most U.S. states.

Additionally, researchers said that it was more convenient keeping some birds in a lab and analyze their brains than doing the same thing with a human toddler. Also, not many creatures have such a similar voice pattern to humans’ as the zebra finch. A previous study has even proven that birdsong and human speech are controlled by the same set of genes.

Speech impairment caused by alcohol wasn’t thoroughly research because there aren’t many subjects to conduct experiments on like zebra finches. Researchers said that they were quite surprised to learn that the finches consume alcohol on their own.

At first we were thinking that they wouldn’t drink on their own because, you know, a lot of animals just won’t touch the stuff. But they seem to tolerate it pretty well and be somewhat willing to consume it,”

After the birds got tipsy, researchers noticed that their songs lost amplitude (i.e. got quieter) and acquired “increased entropy” (i.e. they got more chaotic). Researchers also noticed that not all syllables of the bird-songs got slurred, but only specific ones did.

So, scientists concluded that alcohol effects on both birdsong and human speech are not uniform and only specific brain areas get affected. Also, the study revealed that alcohol consumption does not alter overall “peripheral motor function” in humans. Instead, alcohol alters speech by affecting “higher-level motor control pathways” in the brain, rather than the neuromuscular system.