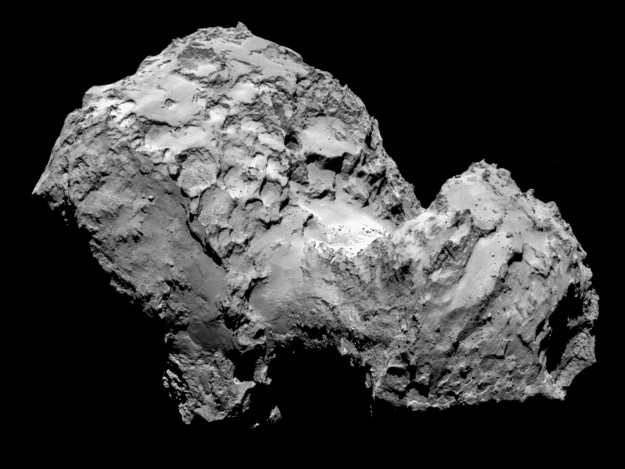 The Rosetta spacecraft, belonging to the European Space Agency (ESA), has succeeded in taking another wonderful shot  of the absolutely notorious Comet 67P, also called Churyumov-Gerasimenko. And according to the ESA, the comet looks the same as it used to in all the black and white images shot before.

That’s probably because it is as grey as it can be, with only a few subtle colour variations that appear every now and than on its surface. Osiris, Rosetta’s camera,  took several shots of the 67P by changing different filters with red, blue or green shades. By overlapping these, scientists understood that the actual colour of the comet is grey.

“We like to refer to Osiris as the eyes of Rosetta,”

“As it turns out, 67P looks dark grey, in reality almost as black as coal,”

Scientists will go on with their studying of the surface composition of the comet.  The Churyumov-Gerasimenko is nearing the sun as we speak and scientists are still trying to revive Philae in order to obtain further precious information about the comet.

Rosetta will complete its mission in December 2015. This is basically  four months after 67P will have reached its closest point to the Sun. This will take place sometime in August 2015. After the peak, 67P will start going back towards the far outskirts of our solar system.

In the meantime, Philae’s recent touchdown on the surface of Comet 67P was eagerly rewarded as one of vital importance to space science. Physics World offered the award the Breakthrough of the Year 2014, explaining this is the new beginning of a totally new paradigm regarding the understanding of the Universe.