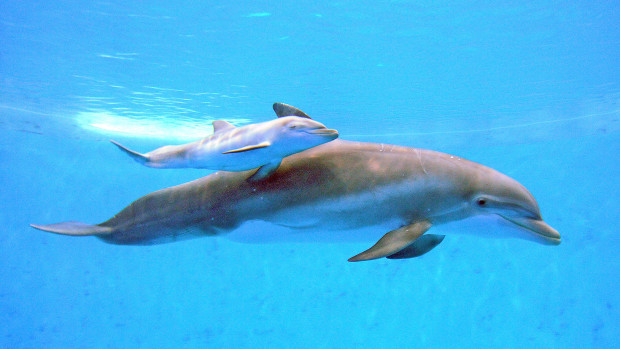 One of the seven bottlenose dolphins at Brookfield Zoo, Allison has become a first time mother at the age of 9 years.

Allison, a bottlenose dolphin at the Brookfield Zoo, gave birth to her first calf. The little dolphin which weighs 35 to 40 pounds and is about 3.5 feet long, was born Friday.

The news was released on Sunday, after the baby dolphin proved his strength and survivability by passing some important tests. A curator at the Zoo, said that everyone is positive that the calf will survive. The behavior of both the mother and the calf has led them to believe that there is a strong possibility in the calf’s survival.

Two of the key important events that the calf has aced were slipstreaming and nursing, thus experts believe that the little dolphin is making good progress.

The first 30 days are the most important after a dolphin was born and the new born is not sure to survive until it reaches one year old. The mother of the bottlenose dolphin, Allison which is 9 years old, and her first baby are living with another 2 year old dolphins and an older, more experienced mother.

Senior Vice President Bill Ziegler, in charge of anima programs at Brookfield Zoo, said that the new born is nursing well and it is healthy. Two weeks before it was born, another calf was born in the zoo, but unfortunately it died a few minutes after.

Allison and her new born are doing quite well according to experts at the Zoo. Bill Ziegler said that the mother and her calf have been slipstreaming. This is a process in which the calf holds the side of her mother and as she swims, creates a wave and they both slide through the water. In this case, the calf doesn’t make much effort because the wave that the mother creates carries the calf along.

Rita Stacey, a curator at the Chicago Zoological Society, said that dolphins form social groups in their lives where mothers help other females in raising their calves. This fact will be good for Allison because she lives in the Seven Seas main habitat of the Zoo with Tapeko. Tapeko is a older mother with two calves and could serve as a wonderful example for Allison to follow.

Officials say that the Seven Seas habitat is closed to the public to grant Allison and her son time and space to create a connection.