You are here: Home / Tech & Science / Astronomers Spot A Double-Sized Earth With A Ground Telescope 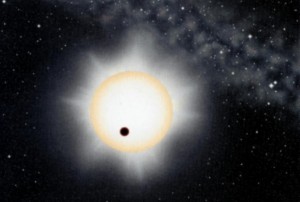 We know exoplanets are out there, outside our solar system and spaced-based telescopes help us prove it. But to spot a Double-sized Earth with a ground telescope is a first. This is what astronomers in a remote Canary Island succeeded this week. It might be just blind luck, but it also may be a new way of making acquaintance with new Earth-like exoplanets.

The Double Earth-sized exoplanet was caught as it was crossing a star by The Nordic Optical Telescope in La Palma, one of the Canary Islands. This marks the first time when such a planet is detected by a telescope based on the ground.

So far, telescopes set on Earth never managed to catch a glimpse of a planet similar to our own.  This work was left to telescopes in space. The recent observations bring a new perspective. They are evidence that, if a telescope from an isolated island could detect such a planet, others here on Earth might do it as well.

The planet was named 55 Cancri e and represents a double Earth in terms of size. The telescope managed to spot it while it was orbiting around its parent star, creating a  hollow in the star’s glow.  Researchers say that until now, no other planet that ranked in the ‘Super Earth’ category was spotted using ground detection telescopes.

However, the planet is not new to astronomers.  They’ve known the celestial body since 2004 when it was detected by a space-based telescope. The exoplanet has a 16,000 miles (26,000 kilometers) diameter and is eight times heavier than Earth.  Just to get the bigger picture, 55 Cancri e is smaller than Uranus or Neptune but, compared to our own blue ball, it’s ‘gigantic’.

The recent observation of the planet supports the method according to which other planets might be detected by looking for shadows in the glow of stars. This means that ground-based telescopes could be further employed to search for and spot exoplanets.

Scientists’ endeavors have led to the discovery of almost 2,000 exoplanets so far and future ventures guarantee their number will increase in the near future.