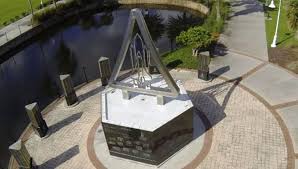 A 15 foot tall monument was erected by the U.S. Space Walk of Fame Museum in Titusville to commemorate the work of NASA astronauts and ground operation personnel.

The dedication ceremony took place on Saturday at the Space View Park in Titusville, where officials highlighted NASA’s space shuttle program and the advances that have been made. Officials said that the monument wasn’t just created to honor astronauts, but also the tireless work of ground crews who made it possible for the missions to become successful.

Constructing the shuttle monument cost approximately $350,000. Most of the funding was handled by the United States Space Walk of Fame Museum, the not-for-profit educational center which dedicates its activity to commemorating NASA’s work, its astronauts and its excellently trained ground operations personnel.

Consisting of six large, black panels, the monument is constructed of granite which holds the information of each separate shuttle mission. Stainless steel emblems cap each granite panel. The shuttle monument weighs eight tons and is shaped like a space shuttle awaiting its launch on the pad before lifting off into orbit.

The dedication of the shuttle monument was attended by several NASA workers, both active and retired. Fred Gregory, former astronaut, applauded the U.S. Space Walk of Fame Museum’s decision to commemorate the efforts of ground operation crews. It’s not just the astronauts that deserve the credit, Gregory said. Actually, the former astronaut insisted that ground crews are the ones who deserve the lion’s share of the credit. This 40,000 person strong team of scientists and engineers works around the clock and all over the Earth to make sure that absolutely every shuttle mission faces the best possible odds to become successful and especially safe.

“Everybody gives us the credit. And for every launch we had, I think there were probably 40,000 people around the world who were going to make that the safest, most successful mission ever,”

In the past, Gregory served as a pilot and mission commander on three distinct shuttle missions.

Andy Allen, ceremony attendee and Gregory’s fellow astronaut was flippant about the alleged glamour and fame accompanying the job.

Allen too was pleased that the Shuttle Monument honored the work of ground crew members, saying that being strapped into a rocket isn’t the hardest part of the mission. He recounted how his mother would tell him that it didn’t show unique intelligence to let oneself be strapped into a massive incendiary device being launched into orbit.