You are here: Home / National News / Seals Using Scientific Track Tags on Fish to Their Advantage 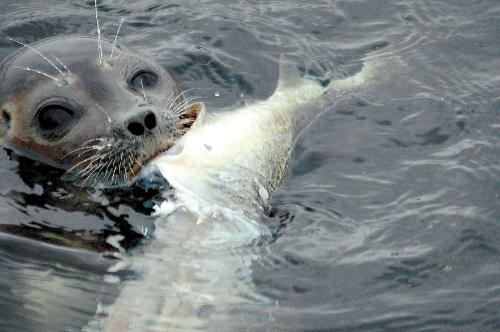 A new study reveals that seals are able to use the scientific track tags on fish to easier find their prey. The study was conducted by a team of researchers at the University of St Andrew, Scotland.

For many years, researchers have used small, fix tags to find out the exact position of different kinds of fish. The tags emit a distinct sound that is then captured by the scientific gear. This kind of acoustic tags is very used when it comes to mark-and-recapture missions to assess fish survival and stock health. Although the ultrasonic frequencies that these tags emit are supposedly, imperceptible to fish, they might work against them.

To further investigate this aspect, a research team from the University of St Andrews in Scotland, have conducted an experiment using gray seals as predators and both tagged and untagged fish as prey. The experiment consisted of setting up a labyrinth with twenty boxes with only two boxes containing fish. One of the boxes contained tagged fish while the other contained untagged fish. The seals where then set loose inside the maze to see which type of fish (tagged or untagged) is found first.

Results showed that seals were far more attracted to the box containing tagged fish, resulting that the pinging sound emitted by the tags can actually be heard by seals. Moreover, the sound is used by the predators to find prey easier. It is believed that the acoustic tags work as ‘dinner bells’ for the seal population, leading them to where the fish is hiding, revealing that the scientific track tags on fish are used actually, against the fish population.

“We expect that other marine mammals are similarly able to use such information to find prey … When we make noise in the sea, we need to consider how animals are affected. Our results show that such effects can be complicated. In our case they were beneficial to the seal but bad for the fish, “

Given the results, the researchers have now new study grounds and they need to use the new information to the advantage of both predator and prey.

A previous study conducted also by researchers at St Andrews had revealed that grey seals choose offshore wind turbines as feeding grounds, hunting around the structures to find potential prey.