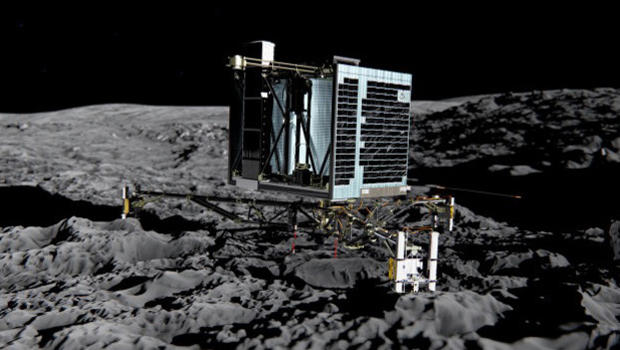 Back when Neil Armstrong took his first steps on the moon, a whole world gasped in awe. Now that Philae has also achieved the near impossible by landing on the surface of 67P/G-C, the world experienced the same feeling once more. After its historic landing on the comet on November 12th, the Philae robotic lander began sending readings and data back to Earth.

Now, Philae sent its final message after its failing batteries forced the probe to go on standby mode in an attempt of saving power. During its shaky landing, the probe landed behind a cliff casting a deep shadow. Sadly, this cliff is preventing Philae from recharging its batteries.

The robot conducted 57 hours of intense scientific experiments on the comet’s surface before fading into deep sleep. And, heroically, just before going into hibernation, Philae managed to send back all of the recorded data. Among this important information, readings from the important instrument Cosac also reached Earth.

Scientists believe that Cosac’s data might reveal the molecular ingredients responsible for life on Earth. All is not lost as Philae’s solar panels might just receive sunlight in the future. Controllers could send commands to the lander’s main body, rotating its fixed solar panels.

“Rosetta’s lander has completed its primary science mission after nearly 57 hours on Comet 67P/Churyumov-Gerasimenko. After being out of communication visibility with the lander since 09:58 GMT on Friday, Rosetta regained contact with Philae at 22:19 GMT last night.”

the ESA announced on Sunday, while also explaining that future contact with the probe would be improbable due to the low recharge current coming from Philae’s solar panels.

Managers attempted to instruct the lander’s body to perform a rotation. It was lifted approximately 4 cm and rotated 35 degrees, however, Philae’s power still rapidly depleted. Stephan Ulamec, lander manager at the DLR German Aerospace Agency says that Philae’s landing in itself was a huge success and that despite the unexpected landing difficulties, data could still be collected.

“In that time, the lander returned all of its housekeeping data, as well as science data from the targeted instruments, including ROLIS, COSAC, Ptolemy, SD2 and CONSERT. This completed the measurements planned for the final block of experiments on the surface”.

Stephan claims that the possibility still exists, as the comet is nearer to the sun, that the connection with Philae be reestablished.

In the meantime, Rosetta orbiter will move back to a 30Km orbit around the comet until December when the comet becomes more active.