You are here: Home / National News / Palestinian Activist Guilty of US Immigration Fraud 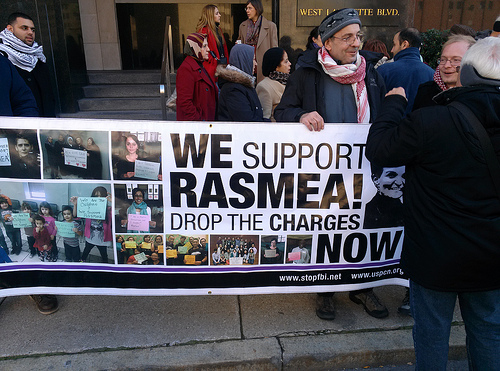 A Detroit jury found a Palestinian immigrant guilty of hiding her involvement in terrorist activities before her arrival in the U.S. from the immigration authorities. Rasmieh Yousef Odeh, 67, was convicted by an Israeli military court for bombing a supermarket and killing two people in 1969.

After spending ten years in an Israeli jail, Odeh was released as part of a deal with the Popular Front for the Liberation of Palestine. Odeh arrived in the U.S. in 1995 and settled in Chicago, where her father and brother were residing. Neither in her immigration form in 1995, nor in her citizenship application form a few years later, she had not revealed the conviction.

During the trial, Odeh said she believed that the question regarding her criminal record refers to convictions in the U.S. Detroit immigration officer, Jennifer Williams, who interviewed Odeh in 2004, told the jury that she always adds “anywhere in the world” to the question. Defense attorney Michael Deutsch rhetorically asked during the closing argument why couldn’t the administration pose a clear question in a particularly important form.

Odeh says that she was tortured by the Israeli authorities to confess. However, U.S. District Judge Gershwin Drain concluded that what happened in Israel was not relevant to the charges of lying in an official form. In a discussion prior to the trial, Judge Drain said he will not allow the defense to use the claim that she confessed after she had been tortured and sexually assaulted.

The prosecutors want to use the case as an example to deter terrorists from seeking to hide in the U.S. Because the trial has drawn national attention, the prosecutors asked for the jury to be partially sequestered to avoid external pressure.

Rasmieh Odeh works with African immigrant women in Chicago and is highly respected for her work at the Arab American Action Network. Consequently, her trial garnered national attention, with daily protests taking place daily in front of the courthouse, as well as in other several states. Odeh’s supporters had an active week on the social media as well.

“The immigration charge was nothing but a pretext to attack this icon of the Palestine liberation movement,” said The Rasmea Defense Committee. The defense attorney will now prepare to appeal the decision. Odeh may spend ten years in prison and lose her citizenship.