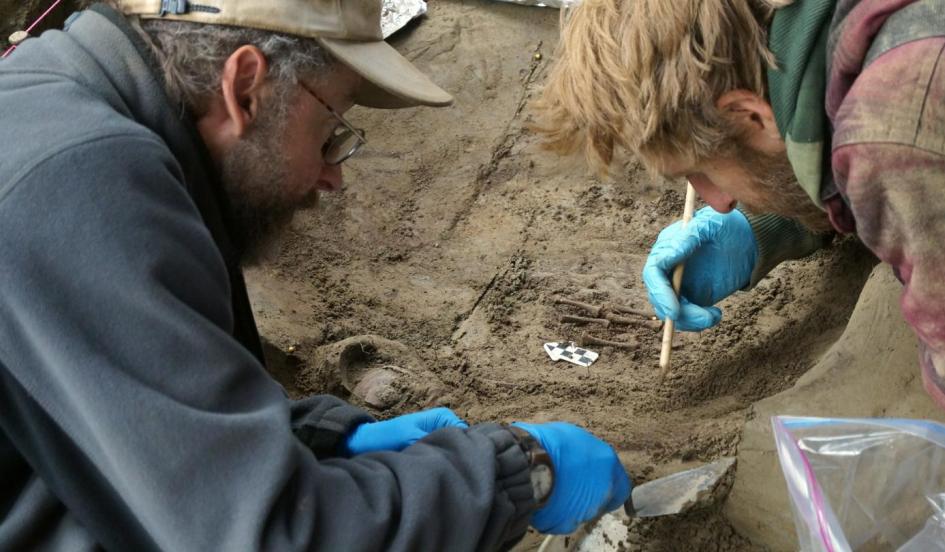 A new study has revealed some unique insights into the death rituals practiced during the last Ice Age that came over North America. Scientists discovered the fragile skeletons of two infants buried beneath the cremated remains of a child.

Researchers explain that the remains they found of a 3 year old child date back to 11,500 years ago. The cremated skeleton was uncovered in 2010 at Upward Sun River, an important archaeological site in central Alaska. When they returned to the site in 2013, they uncovered two additional bodies.

Ben Potter, associate professor and chairman of anthropology at the University of Alaska, Fairbanks, explains that the team of archaeologists got to the bottom of what they believed was the grave. Then, they noticed a carpet of red ochre, which led them to believe that there was something more to be discovered.

“Then, we encountered the human remains and the grave goods at the very bottom. That was very unexpected and amazing.”

Excavation efforts were halted and the team of archaeologists began investigating the remains of the infants.

“They were treating the human remains with respect, and that’s really what you need to do,”

The legs of the two infants were bent in an unusual and remarkable way, Carlson explained. He added that one of the two was a late-term fetus, as the teeth and bones suggested, while the other was approximately five weeks old.

These two infants have become the youngest known individuals from the Pleistocene epoch who received burial, the study wrote.

Apart from the infants, the burial site contained a prehistoric hunting tool kit, with stone-made bifaces, spear points, antler foreshafts, suggesting that the infants may have come from a hunter family.

“Imagine if you are a hunter on the landscape. You wouldn’t want to carry a large amount of heavy spears or dart shafts with you. You would just have one or two [foreshafts], but you would have many points in case you break one.”

Scientists also suggested that the two infants may have been twins, however DNA testing is required to verify the idea. Potter explains that a highly mobile foraging society isn’t likely to have had two deaths from different mothers at precisely the same time. He added that one may have died in utero, increasing the chances of an early death for the surviving child.

“It brings forward information about Alaska 11,500 years ago from a time which we knew very little about and we know a lot more about now,”

Carlson said about the findings.