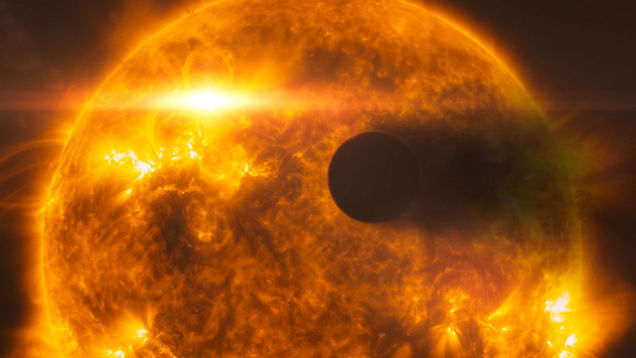 By measuring parameters of the hydrogen layer surrounding a distant extrasolar planet, a group of international scientists were able to estimate the size and shape of its magnetosphere. The findings were compiled in a general model that could be used in future scientific attempts of measuring any exoplanets’ magnetosphere.

Extrasolar planets or exoplanets are planets located millions of light-years away from our solar system. Due to the incredible long distances between them and our planet, they can’t be reached by using today’s space traveling technology. Hence, astronomers look for new ways of estimating how those planets might be like. Measuring exoplanets’ magnetosphere was this time on the list.

In the recent experiment, scientists studied a distant exoplanet named HD 209458 b or Osiris. Osiris has its own sun around which it revolves every 3.5 human days and a very hot outer layer (about 1,800 °F). Scientists believe Osiris is a gas giant like Saturn, for instance. Gas giants are formed of highly condensed gases and have a 10 times heavier mass than our planet. HD 209458 b is two times larger than our planet and 220 times heavier. It also has a hydrogen atmosphere enveloping it which helped scientists measure its magnetosphere.

In order to find out more about HD 209458 b’s hydrogen atmosphere, scientists analyzed through the Hubble Space telescope the way the solar winds coming from Osiris’s sun were interacting with Osiris’s hot hydrogen cloud. Researchers believe the protons brought in by the stellar winds interact with Osiris’ exterior hydrogen atoms just above its magnetic field. Therefore, astronomers estimated what the shape and volume of the exoplanet’s magnetosphere were, just by calculating its surrounding hydrogen cloud parameters.

Scientists watched HD 209458 b orbit its sun through Hubble Space telescope in the hydrogen Lyman-alpha line filter. When they caught a glimpse of the planet when it stood between its sun and Earth, the team calculated the amount of solar radiation HD 209458 b’s hydrogen atmosphere absorbed. Based on those findings, scientists were able to approximate its magnetosphere’s features.

We modeled the formation of the cloud of hot hydrogen around the planet and showed that only one configuration, which corresponds to specific values of the magnetic moment and the parameters of the stellar wind, allowed us to reproduce the observations,

Earth has a magnetosphere or magnetic field, too. It protects our planet’s living creatures from being harmed by cosmic radiation and helps birds find their way back during their annual migrations. The beautiful polar auroras are also caused by charged stellar particles interacting with our planet’s magnetic field.