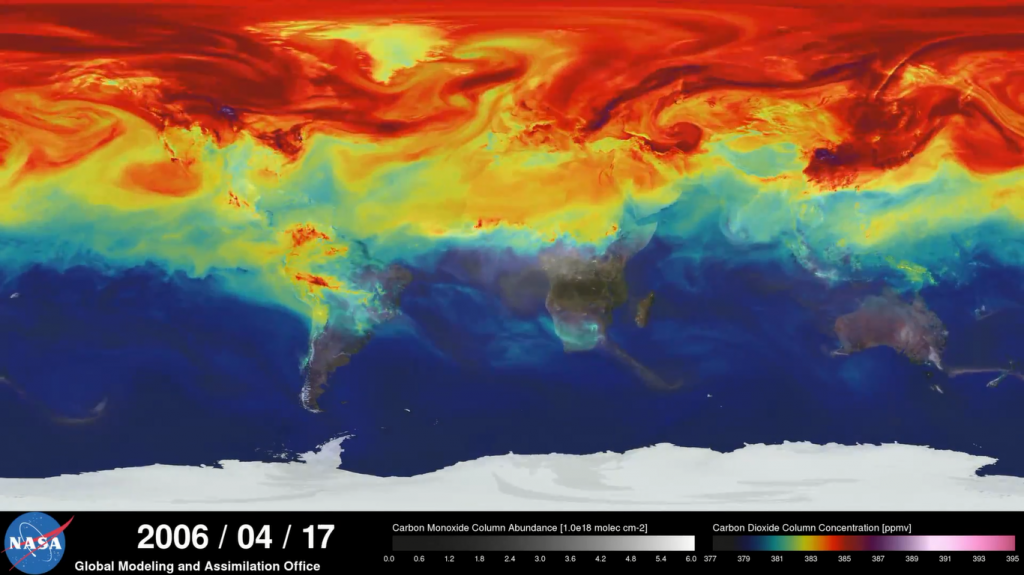 CO2 emissions know no borders. NASA’s latest video on the matter clarifies the issue in a very compelling manner. This is the highest resolution set of images to date showing the global extent of CO2 production. According to the scientists, the result is 64 more accurate than any previous versions. What we see is a computer model simulating carbon dioxide emissions in 2006. Both human and natural made gas are taken into account.

If the video looks frightening, bear in mind that the last eight years have seen an increase of CO2 levels. The level broke the record this summer, when CO2 concentration stayed at over 400 parts per million for three straight months. Before the industrial revolution took off, the level stayed at 270 ppm.

The clip shows a computer model called GEOS-5, the creation of scientists at NASA Goddard’s Global Modeling and Assimilation Office. Scientists fed the computer with real data on CO2 levels and overall atmospheric conditions. Afterward, they let the machine do the “Nature Run” simulation. For years, scientists worked with a beta version. Now they finally released an improved version, which they will present at a conference on supercomputing this week at New Orleans.

“While the presence of carbon dioxide has dramatic global consequences, it’s fascinating to see how local emission sources and weather systems produce gradients of its concentration on a very regional scale,” said Bill Putman, lead scientist on the project from NASA’s Goddard Space Flight Center in Greenbelt, Maryland. “Simulations like this, combined with data from observations, will help improve our understanding of both human emissions of carbon dioxide and natural fluxes across the globe.”

Indeed, the video shows how the northern part of the globe is by far the largest CO2 producer. The gas swirls and shifts around the globe while interacting with geography. Emission levels change dramatically along with the seasons. The highest levels are produced during the winter all over the northern hemisphere. During the summer, local fires in Central Africa turn into one of the main gas producers, although at much lower proportions.

We are going to witness even better pictures of the situation once NASA’s Orbiting Carbon Observatory-2 (OCO-2) satellite launched a couple of months ago will have gathered sufficient data. Until now, researchers relied on ground-based measurements of CO2 emissions.