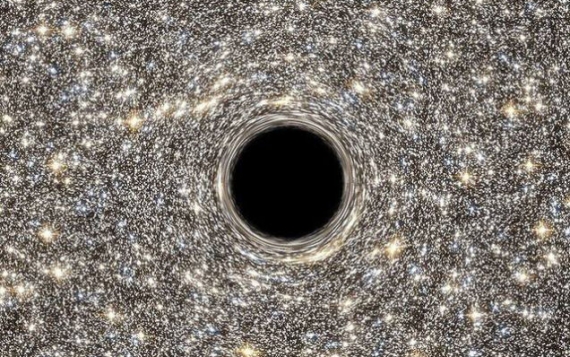 NASA is celebrating its 2nd annual Black Hole Friday. Throughout Friday, NASA had been sharing pictures and info about black holes on social media.  The #BlackHoleFriday meant that NASA tweeted facts about black holes, including a handful of Black Friday-themed jokes.

All in all the space agency sent out over a dozen tweets and retweets on black holes, such as:

“If you lived inside this dwarf galaxy, the night sky would dazzle with at least 1 million stars visible to the naked eye. Our nighttime sky as seen from Earth’s surface shows 4,000 stars.”

Moreover the agency also tweeted out a black hole-themed game you can find here: 1.usa.gov/1AZ1SNn  #BlackHoleFriday.

“If you lived inside this dwarf galaxy, the night sky would dazzle with at least 1 million stars visible to the naked eye. Our nighttime sky as seen from Earth’s surface shows 4,000 stars,”

this is what NASA wrote about the above image.

The classical definition of a black hole goes like this: the gravity in a black hole is so strong that even light can’t escape. The region around the black hole affected by the gravitational pull is called the event horizon. As gas, dust and stars are sucked in to the black hole, the material is heated and accelerated producing X rays.

NASA defines a black hole as “a place in space where gravity pulls so much that even light cannot get out,” where “the gravity is so strong because matter has been squeezed into a tiny space.”

Sometimes some of the material doesn’t fall into the black hole but is ejected at incredibly fast speeds, as Nasa explained. Their analogy was with  someone eating very fast, this process causing some food to be spilt.

The “2-for-1 deal” was a hit, garnering over 1,000 retweets. The space agency also posted some fun and less-known facts about black holes: for instance, some scientists believe that the smallest black holes are the size of a single atom.