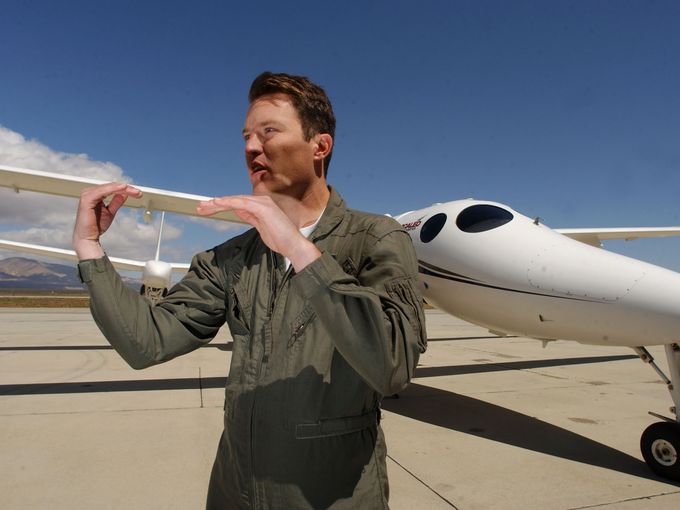 A 39-year old flight engineer, Michael Alsbury, died on Friday in a spaceship crash. The Virgin Galactic spaceship exploded and fell from the sky mid-flight over California’s Mojave Desert. This was no inexperienced flier. Alsbury was a long-time and extremely experienced pilot who first broke the sound barrier last year. According to the pilot’s biography, he has been collaborating with Scaled Composites (the company that built and operates SpaceShipTwo) for the last 10 years.

Peter Siebold was also on the flight. Although he managed to parachute to safety he was seriously injured. He is scheduled to undergo surgery Saturday afternoon, says the Kern County Sheriff’s Office. Alsbury was an engineer and test pilot with an impressive record. According to his biography, he held B.S. in Aeronautical Engineering from California Polytechnic State University. Alsbury was also a member of the “Society of Experimental Test Pilots and Society of Flight Test Engineers.

He was also sitting in the co-pilot’s seat when the craft first dropped from its carrier aircraft back in 2010, for an unpowered glide test. Test logs show that Albsury mainly operated as the spacecraft’s co-pilot, with at least even trips in the last 4 years. Interestingly enough, the pilot had more than 15 years of experience and 1.800 hours of flight experience with several certificates: for glider commercial, single and multi-engine instrument flight instructor.

The Los Angeles Times confirmed his identity after an official declaration from the Kern County Coroner’s Office. The Daily Mail also reported that Alsbury was a happily married father of two. His modest residence is in Tehachapi, near the Movaje Air and Space Port, where most flights took place.

Two men intercepted reporters around his residence on Saturday morning. Reporters say that the family is currently grieving and refused to give any comments at this time. They managed to interview one of the neighbors, who said that the family had been living here for the past two years. He also declared that the two had young children. Cling Nichols, one of Alsbury’s co-workers, described him as “the great pilot, a great engineer”.

Very few men ever flew the spaceship and companion aircraft. Alsbury was one of them. He had also been a co-pilot for WhiteKnightTwo, which carried the separate spaceship above ground before dropping it to initiate rocket-powered flight.

It is still unclear if Alsbury was the one operating the spaceship at the time of the crash. Usually, Siebold was the one to pilot, and Alsbury the co-pilot.