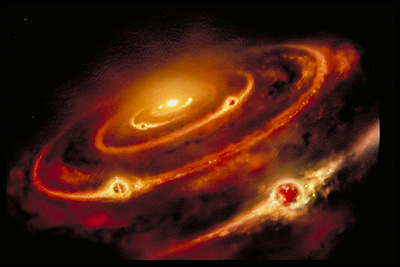 Scientists had long believed that strong magnetic fields may have been involved in the formation of our solar system. However, it is only recently that they could find physical evidence supporting this theory. An ancient meteorite is the bearer of this evidence.

Approximately 4.6 billion years ago, just shortly after our sun had formed, the rotating disk of dust and gas surrounding the newly formed star merged and formed what we now call the planets of our solar system. Scientists studying these phenomena explain that, around young distant stars, such protoplanetary disks generally form quickly, around 5 million years or less.

Out of this protoplanetary disk, 99 percent of the mass was absorbed into the sun, however, scientists could not explain how so much material could have swirled into the sun as fast as astronomers believe it did.

In attempting to explain what happened to accelerate this phenomenon, scientists thought of magnetic fields.

“Magnetic fields can introduce viscosity into the disk, essentially making the gas in it more sticky,”

According to this theory, Fu says, gas found on differing orbits would have interacted strongly with each other, causing more gas to fall towards the star. And the theory seems to be supported by what scientists discovered hidden in the Semarkona meteorite, the rock which landed in northern India in 1940.

“It’s a very primitive meteorite, which means that since it formed about 4.5 billion years ago, not much has happened to it. This means it preserves the properties it had when it first formed, helping shed light on that time.”

Semarkona is comprised of tiny, round pellets called chondrules. Such pellets form as molten droplets and then quickly cool in space. Many such chonrdules are comprised of iron-bearing minerals which could have recorded the magnetic properties of certain magnetic fields present during the period of time when the solar system was forming.

According to scientist, such a discovery indicates that the magnetic fields present during that time were important enough to be a significant influence in the accretion process involved in the solar system’s creation.

What is most remarkable about Semarkona is the fact that it’s one of the very few meteorites which haven’t been altered in any way, and as such, it has maintained its original magnetization.

“This is the first direct information we have on the magnetic fields in the early solar system. It’s a really difficult measurement that was very cleanly performed — it stands out as a real tour de force.”