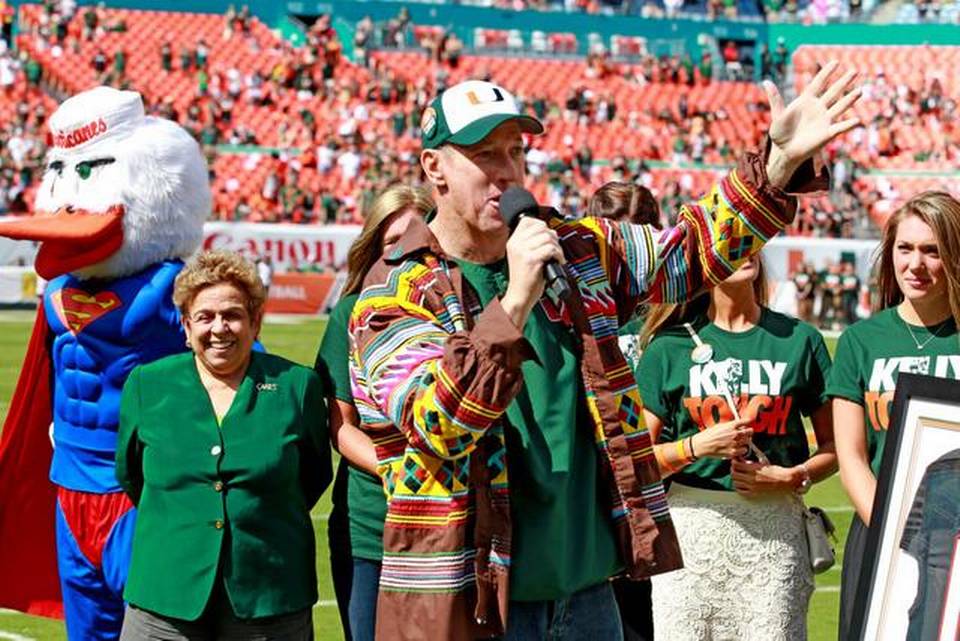 Jim Kelly, Miami’s former quarterback and member of the Pro Football Hall of Fame, was also grand marshal for the UM homecoming parade on Friday night. He was also honored during a ceremony, on Saturday, during half-time. Jim Kelly has been struggling with cancer of the jaw and nasal cavity. He now has a staph infection in the bones and has to carry around portable medical equipment to administer antibiotics intravenously three times a day.

This Saturday became “Kelly Tough” day. The star received a 10.000$ check from the sale “Kelly Tough” T-Shirts to benefit his foundation. He was surrounded by his loving family: a wife and two daughters. Jim was also presented with an UM jersey that had his late son’s, “Hunter”, name on it. Kelly started the ‘Hunter’s Hope’ foundation in honor of his boy, who was diagnosed with globoid cell leukodystrophy when he was only 4 months old. In 2005, at the age of 8, Hunter drew his last breath.

The event unfolded beautifully at the Sun Life Sadium where the crowd cheered in approval during a standing ovation. “Kelly! Kelly! Kelly!” they sang as the quarterback walked off the field.

“I like that. I really haven’t heard that many cheers in this stadium for a long, long time and I think you all know what I’m talking about. I know in Buffalo, N.Y. and right here in South Florida, the resiliency you have to continue to pray for myself and my family – God bless you guys. Thanks so much” Kelly told the excited crowd.

Kelly was not the only one to be honored on Saturday. The late defensive tackles Jerome Brown, and Russel Maryland were also added to the Ring of Honor.

In other news, freshman Trevor Darling made his debut and played very well, says Golden. His backup, Sunny Odogwu, also came in for a series in the second quarter but lost on his first play for a sack by Mick Bart. Nevertheless, Golden was pleased with his offensive line’s effort.

‘We’ve lost four players since the spring, and the fifth transferred. That’s four tackles. That’s hard to overcome. I really appreciate their effort right now. Trevor went in and did a nice job for us. He’s going to learn a lot. He’ll get better from this.” – coach Al golden