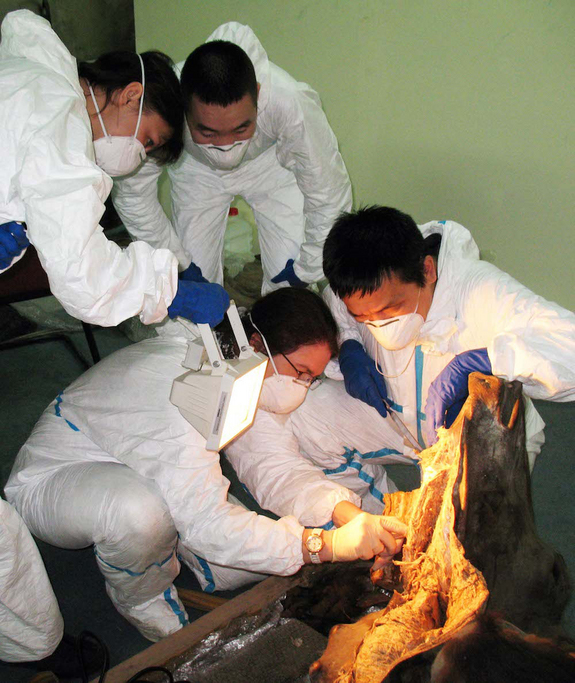 A team of researchers has been conducting studies on the largest and best preserved steppe bison mummies found in Siberia. There have been other similar mummies discovered throughout the years, however, the Yukagir bison mummy has actually set a record for its preservation level.

“But the mummy was preserved so well that it [earned] a record for the level of its preservation.”

The mummy was actually discovered by chance in 2011 by a tribe in North Siberia and since then, researchers have been conducting studies. It’s precisely because such specimens are so rare that paleontologists are so enthusiastic. Normally, such mummies are partial carcasses and, as with most of North America’s and Siberia’s megafauna (which are eaten or destroyed in spite of having been in the permafrost for tens of thousands of year), research is difficult.

The team’s work revealed that the bison died at a young age, about 4. Although the exact cause of death hasn’t been established, the team is led to believe that starvation killed the steppe bison. There was a distinctive lack of abdominal fat which supports the hypothesis.

Researchers explain that the bison was otherwise perfectly preserved. Its brain, heart, blood vessels and digestive system were all intact although displaying some level of shrinkage. Because of this preservation level, scientists were able to obtain tissue samples from virtually all of the bison’s organs.

“The exceptionally good preservation of the Yukagir bison mummy allows direct anatomical comparisons with modern species of bison and cattle, as well as with extinct species of bison that were gone at the Pleistocene-Holocene boundary,”

There were distinct differences between today’s bison and the mummified steppe bison. Its horns were significantly larger and it presented a second back lump. This is the bison commonly featured in Stone Age art, where bison are shown being hunted by humans.

Hopefully, researchers will be able to gain insight into the cause of the animal’s extinction.